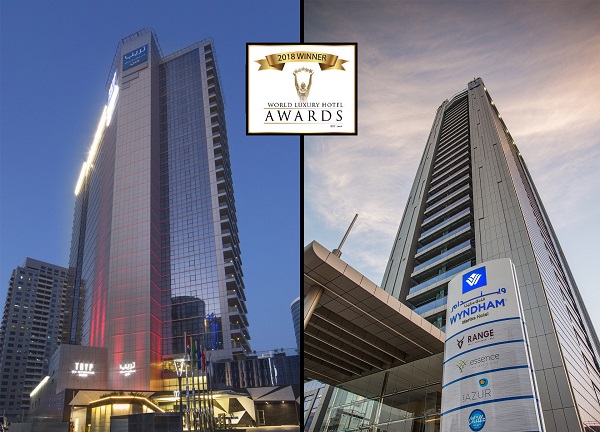 The First Group’s Wyndham Dubai Marina and TRYP by Wyndham Dubai have been recognised for their commitment to excellence, with both properties receiving a ‘Best Luxury Modern Hotel’ award at the World Luxury Hotel Awards, which took place in Bali on November 10.

Both categories were hotly contested by multiple recognised hotel brands in Dubai and the GCC region, where hospitality industry standards are notoriously world-class. However, The First Group’s properties received the most votes from the more than 300,000 discerning international travellers who nominated their favourites.

The World Luxury Hotel Awards, which celebrates its 12th anniversary this year, is an annual event that aims to “define excellence in global hospitality” and invites leading four- and five-star properties around the world to put their unique luxury offerings to the public vote.

The First Group’s Wyndham-operated properties received their awards at a gala ceremony, which was staged at Ayana Resort & Spa in Bali, Indonesia, and attended by more than 350 guests from the global tourism and hospitality industry.

Wyndham Dubai Marina and TRYP by Wyndham are the company’s first two operational hotels and both have made a big impact since opening their doors in April 2016 and August 2017 respectively.

Wyndham Dubai Marina is a contemporary hotel in one of the city’s most sought-after locations, with a rooftop pool, spa and a variety of popular dining options, including The Blacksmith, Dubai’s first real smokehouse, and Hello Café, which opens soon and promises to serve the best coffee in town.

Meanwhile, TRYP by Wyndham in Dubai’s trendy Barsha Heights district has made its mark as a dining and nightlife destination, popular with guests and residents alike. The hip lifestyle hotel is racking up a medley of accolades, having recently been named ‘Four-Star Hotel of the Year’ at the prestigious Middle East Hospitality Awards 2018.