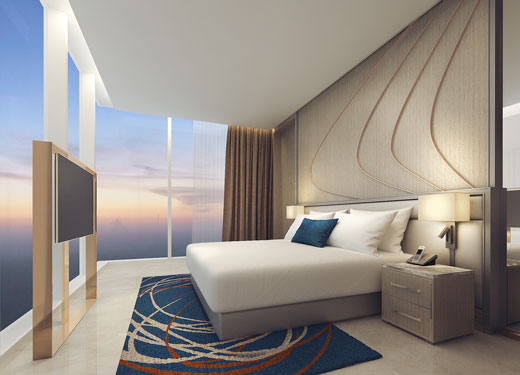 The One at JVC, which will operate as Wyndham Garden JVC, will span 45 floors and feature 491 guestrooms and suites. The property will mark the debut of the Wyndham Garden JVC brand in Dubai – a fact that further enhances its investment appeal.

Wyndham Hotel Group’s reputation as one of the world’s top hotel management firms and vast experience in a diverse range of markets is a winning formula that will position Wyndham Garden JVC for long-term success.

In 2016, it was named ‘Hotel of the Future’ at the prestigious id Design Awards, while the following year, it was declared Leisure and Hospitality Project of the Year at the Middle East Architect Awards.

Meanwhile, The One at JVT, which will operate as Millennium Place JVT, is an impressive four-star upper midscale hotel that will house 579 guestrooms and suites and a range of premium guest amenities.

Ideal for business and leisure guests, the hotel will feature 24-hour reception and concierge services; a range of restaurants and bars; a Club House featuring rooftop swimming pool, gym and sun deck; a business centre; and Wi-Fi access throughout the building.

Millennium Place JVT has also won a number of prestigious awards prior to its official opening.

The hotel’s close vicinity to the Expo site makes it particularly attractive to potential investors. With 25 million people forecast to visit the event and as one of the first international hotels scheduled to open in the area, Millennium Place JVTis certain to attract strong demand.

- As of November 2019, the building is in the final stages of development;

- Dubai authorities recently completed their first inspection of the building;

- The fit-out of the hotel’s various F&B outlets is continuing.

- As of November 2019, the building’s super structure has been completed;

- Detailed drawings of the interior design of the hotel’s F&B outlets are in the final stages of approval.

* The area is divided into six districts spread across two co-located areas: Jumeirah Village Triangle, which was officially completed in 2012; and the larger Jumeirah Village Circle, which features a concentric road layout with a central community landscaped area located at the centre of the development.

LOCATION: In the heart of New Dubai adjacent to Dubai Sports City

How to Invest in Dubai? Best Places & Ways...