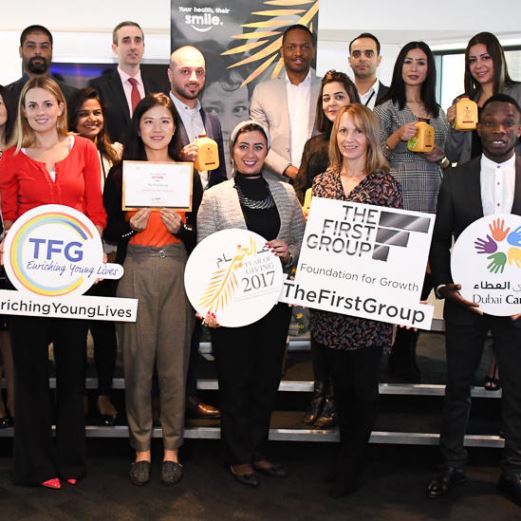 December 2017: The First Group has made a difference to the lives of underprivileged children and families in developing countries around the world by supporting the UAE government’s 2017 ‘Year of Giving’ Corporate Social Responsibility (CSR) drive.

The initiative calls on the country’s corporate sector to become involved in socially responsible activities and the company has responded by making generous donations to the Dubai Cares Foundation — the largest charity in the world devoted to helping disadvantaged youngsters get access to quality primary education.

In 2017, The First Group has backed several major initiatives in support of Dubai Cares’ efforts in countries including Bangladesh, Cambodia, Haiti, India and Indonesia, often in partnership with charities such as Save the Children, Unicef, Oxfam, Care International and Plan International.

They include the ‘Smile Campaign’, which asked UAE firms to buy bottles of Forever Aloe Vera Gel for its employees, with a percentage of proceeds donated to the charity.

The campaign, spearheaded by Forever Living Middle East, which distributes the gel in the UAE, was designed to help companies improve the health of their employees while simultaneously contributing to the educational needs of impoverished youngsters around the world.

A campaign manager will be visiting The First Group soon to deliver the bottles of Forever Aloe Vera Gel and explain about its health-giving benefits, as well as outlining the Smile Campaign and what it hopes to achieve.

Funds raised by The First Group have also supported the Dubai Cares ‘Education Cannot Wait’ programme – an emergency response to the influx of Muslim Rohiungya refugees in Bangladesh who have been displaced by violence in Myanmar.

Dubai Cares has committed more than AED1.8 million (US$500,000) to the programme and is relying on donations by companies including The First Group to honour this pledge.

The conflict in Myanmar has forced more than 410,000 Muslim Rohingya to flee their homes to Bangladesh, creating a new humanitarian crisis, according to the United Nations. The vast majority of these refugees are women, and include mothers with newborn babies and families with young children.

“Education Cannot Wait continues to mobilise the public and political commitments needed to get every crisis-affected child into school and learning by 2030,” explained Dubai Cares CEO Tariq Al Gurg.

The First Group CEO Rob Burns said: “As a company we wholeheartedly share the vision of the UAE government and its esteemed leaders, believing that helping others less fortunate than ourselves is our responsibility and moral duty and that education is one of the most effective ways to break the poverty cycle.

“I’d like to thank everyone at The First Group for embracing the company’s drive to support Dubai Cares and its efforts to make a difference to the lives of underprivileged children and families around the world. In 2018, we will continue to partner with the charity and other worthy causes as part of our CSR programme.”