Solar panel roof will generate half of Expo 2020's power 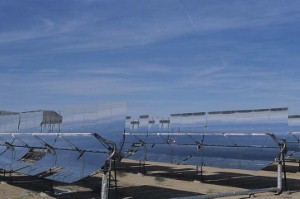 A special roof of solar panels could provide half the power needed to run the Expo 2020 event in Dubai.

This structure would consist of vertebrae photovoltaic material capable of generating power both for the event and the long-term future of the emirate, Gulf News reports.

The announcement comes as the Bureau of International Expositions gets ready to make its vote and choose the successful bid, Dubai is one of four competitors.

Director of investment and development management at Dubai World Trade Centre (DWTC) Christopher Scott said: 'The shading structure would not only provide visitor comfort, but would become one of the iconic images of the Expo, stretching over the entire site and also used as a backdrop for projections for general entertainment.'

As part of the bid, each country had to include elements which relate back to their own country and Dubai has selected the theme of 'Connecting minds, Creating the Future' with sub-themes on mobility, sustainability and opportunity.

The solar roof helps add to Dubai's growing modern innovations, providing clean, green energy which makes the most of its strong sunshine. Last month it launched the Mohammed Bin Rashid Solar Park, capable of delivering 13 megawatts of power adding to the diversity and cleanliness of Dubai's power and infrastructure.

Of hopeful bidders, Dubai seems to be the favourite to win, Canadian officials and the British prime minister David Cameron have stated their belief in the city and its ability to deliver a World Expo.

Most recently, the city of Lyon in France has officially backed the emirate in its goals. The French embassy referred to the expo as a natural step for Dubai, which already has an economy heavily influenced by tourism, in addition to its investment in services and infrastructure such as clean solar power.

Senator-mayor of Lyon Gerard Collomb said: 'Dubai's bid for the World Expo 2020 demonstrates how large cities can rise to the challenges of the future, which is relevant to Lyon's own international development plan.'