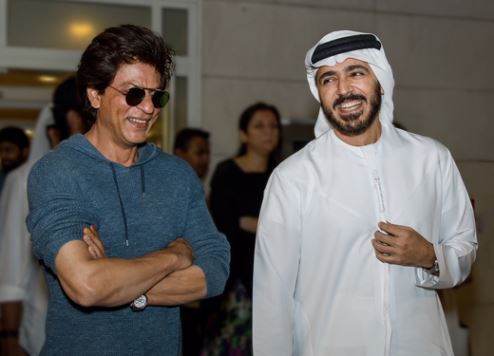 Bollywood icon Shah Rukh Khan has returned to Dubai to shoot the sequel to the award-winning #BeMyGuest film.

The second phase of the promotional campaign is being shot in collaboration with well-known Indian film director Kabir Khan.

With millions of fans around the world faithfully following his every move, Shah Rukh Khan, or SRK as he is known, continues his exciting journey in Dubai in his own inimitable style, shining a light on the multidimensional and multicultural character of a bustling metropolis that he considers his second home.

#BeMyGuest is a film produced by Dubai’s Department of Tourism and Commerce Marketing (Dubai Tourism) in a bid to further enhance the emirate’s position as a ‘must-visit’ destination and attract even more tourists from India.

The country is a key source market for Dubai’s tourism industry, with 1.6 million Indians visiting the destination in 2016, up 26 percent on 2015.

The trend looks set to continue in 2017, with 580,000 visitors from India reported in Q1 representing a 23 percent increase on the first three months of 2016.

Shah Rukh Khan said he was excited to return to Dubai to film the sequel to the hugely successful #BeMyGuest campaign film, which had been shot creatively, marking a departure from how tourism promotion videos were normally produced.

Describing the film as “so funny and sweet”, he said it showcased Dubai in all its glory.

“I am not an advocate for Dubai because I have done Dubai Tourism films; I genuinely like being in Dubai,” he said. “I think it’s a really wonderful place, it’s a fantastic city – it has everything for everyone.”

Since its launch in December 2016, #BeMyGuest has attracted 45 million views across multiple social media channels as well as 65 million engagements from around the world. #BeMyGuest also reached number three on YouTube’s worldwide trending list within 48 hours of its launch, becoming one of the top 10 most-viewed videos on the website globally in December.