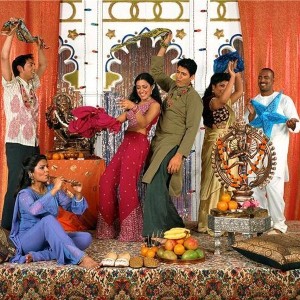 The city's government has altered the regulations surrounding film-making so it is now easier for companies to secure permission to record footage across the emirate.

Khan's next feature, entitled Happy New Year, is being extensively shot in Dubai - particularly at Atlantis - The Palm - and he told the National why they chose the sheikhdom as the main setting for the film.

'It's like when you're choosing a city for the Olympics. For us ... there's only one city that fits the bill and that's Dubai,' he was quoted as saying.

'I just love the way the city breathes and you have something for everyone here.'

Khan added that Dubai is one of the most cosmopolitan cities in the world and it is full of friendly people, glamorous hotels and luxury cars.

In fact, he loves the city so much that he describes it as his second home. Khan is certainly not the first Bollywood star to take a shine to Dubai.

A number of the Indian film industry's biggest stars have not only performed in the emirate, they have purchased second homes there too.

He described the sheikhdom as 'dynamic' and the large number of people from Pakistan and India who have already relocated to the UAE makes it feel even more like home.

The fact that Dubai is just a relatively short flight from Mumbai - the home of the Bollywood film industry - also adds to its appeal among actors.

Director of Happy New Year Farah Khan also heaped praise on Dubai. Speaking to the National, he said the city has 'beautiful locations' and an impressive infrastructure.

He added that the emirate has a distinctive atmosphere and a certain glamour that is hard to find anywhere else in the world.