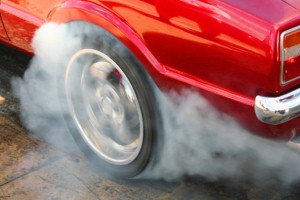 The regional finals for Red Bull's King of Drift challenge are coming to Dubai for the first time on November 8th.

It will take place between 21:00 and 23:30 local time at the Dubai World Trade Centre (DWTC) as part of 2013's Dubai Motor Festival. This stage of the contest will see 17 participants - each a finalist from their own country - competing to win the regional heats.

King of Drift started in 2008 and has since grown with the popularity of drifting - a driving technique where drivers oversteer vehicles for show while maintaining speed and control - heading to Dubai as it becomes more well known for its expansive motoring community and industry.There are plenty of sports cars to be found in the city, reflecting its residents' taste for luxury. Motoring fans and industry figureheads are also expected to attend from across the globe for both business and leisure.

Red Bull's area communication manager Alberto Chahoud said: 'The [show] has developed into a global milestone in the automotive industry and we are thrilled to contribute to this great manifestation by bringing the Red Bull Car Park Drift Regional Finals to Dubai for the first time ever.'

The event will mark the penultimate day of the Dubai Motor Festival, which runs between November 5th and 9th. It will be opened with a grand parade of luxury vehicles, including sports cars from the city's police fleet.

Senior vice president at DWTC Trixie LohMirmand said: 'This is an event that adds pace, adrenalin and global reach for Dubai as the regional leader of motoring.'

It is a major occasion for the motoring industry, with a series of announcements occurring throughout.