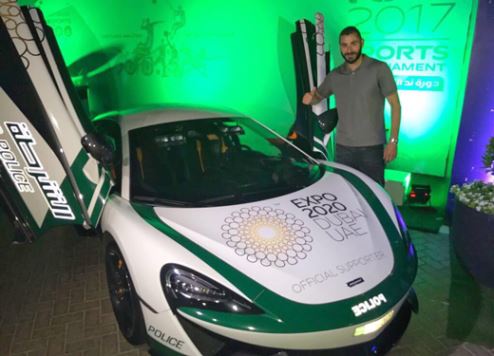 Real Madrid star Karim Benzema has been spotted sightseeing in Dubai – in a police supercar.

The French footballer was attending the Nas (Nad Al Sheba) Ramadan Sports Festival football tournament when the police offered him a tour of the city in one of its prestige vehicles; a McLaren 570S supercar.

The striker, who was on vacation in Dubai following Real Madrid’s recent Champions League victory, took the opportunity to praise the efforts of Dubai Police to champion safety in the city.

The Dubai Police fleet of super cars keeps expanding, but its pride and joy is the Bugatti Veyron.

Dubai Police uses the fleet of luxury, high-performance vehicles to encourage greater interaction with the public and to raise its profile on the city’s streets.

Dubai Police is considered a trailblazer of innovation in the region and recently revealed plans to introduce the UAE’s first Robocop as part of Dubai’s ‘Smart City’ initiative.

Robocop's first job posting will be at malls and tourist attractions where people can tap a touchscreen on his chest to report a petty crime, pay traffic fines or chat and ask questions in Arabic or English.

The ‘cop’ is equipped with a camera that transmits live images to the Dubai Police operations room and its main purpose is to “find a new way to deal with people”, according to Dubai Police.

If trials are successful, the robots will be used more widely in the future, with a view to them comprising 25 percent of the force by 2030.