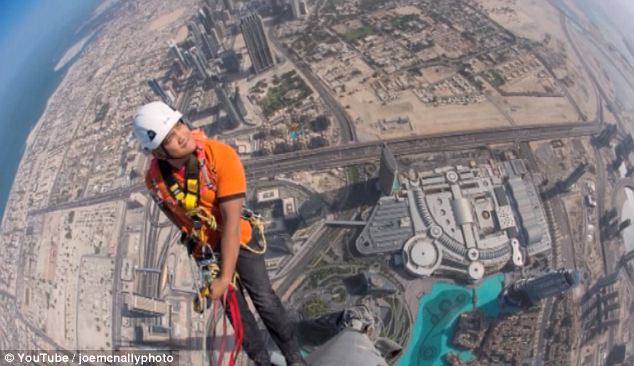 Joe McNally - who has been a regular contributor for National Geographic for more than 20 years - was invited by two maintenance workers to scale the world's tallest structure.

The building's administrator had given Mr McNally permission to record footage of his adventure and this can now be seen on video sharing website YouTube.

Although the two men who guided the photographer to the summit of the 2,722ft skyscraper are accustomed to dangling from the building on a daily basis, for Mr McNally this was a once-in-a-lifetime experience.

"I've been a big fan always of getting my camera in different places and trying to seek the unusual vantage point," he remarked.

"The tower is obviously a commanding presence. It sprang out of the desert here. It's the tallest structure in the world."

Anybody who has visited in recent years will know just how dominant the Burj Khalifa is.

Work first got underway in 2004 and the massive spire was in place by January 2009. The tower was officially opened 12 months later.

As well as being the tallest manmade tower on earth, the Burj Khalifa holds a number of other records, including the highest number of storeys in the world (160), the highest occupied floor on the planet, the tallest observation deck and the elevator with the longest journey in the world.

The building is the centrepiece of the Downtown Dubai area, which is proving to be an increasingly popular region among property investors.

Real estate prices in this particular part of the city have risen sharply in recent years and this is a trend that is likely to continue throughout the rest of 2013.

A recent study conducted by Bayt.com showed the average rent in a two-bedroom apartment in Downtown Dubai increased by 4.7 per cent in the first quarter of 2013, while the asking price for studio accommodation and one-bedroom properties went up by 2.3 per cent and 4.2 per cent respectively.