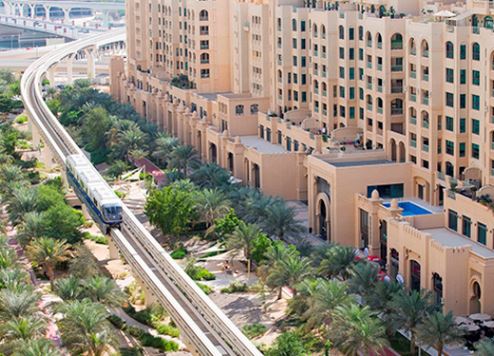 Visitors to Dubai can now explore the Palm Jumeirah more easily with the opening of a new, conveniently located monorail station.

The Al Ittihad Park station provides access to major attractions on the Golden Mile along the man-made island’s trunk including the Golden Mile Galleria Mall and Palm Jumeirah’s central park.

The Palm Monorail, which opened in April 2009, spans the entire length of The Palm’s trunk and connects the island with Dubai’s mainland.

It is also the main mode of transport for visitors heading to Atlantis – the pink resort on the apex of The Palm.

More than one million people, including residents and tourists, use the monorail public transport system annually, according to Nakheel, the developer behind the Palm Islands.

The number of users is expected to increase as more attractions open their doors on Palm Jumeirah.

In May, Nakheel signed a construction contract worth AED1.5 billion ($408 million) to build The Palm Gateway, a new three-tower residential, retail and beach club complex.

The developer is also planning to build two new retail developments – Nakheel Mall and The Pointe – both of which will have their own monorail station.

“The opening of Al Ittihad Park Station is a massive boost for the island’s investors, residents, visitors and retailers, and further cements our commitment to providing new services and attractions at this world-famous community.

“More people than ever can now enjoy the growing number of facilities on Palm Jumeirah – without using a car to reach them.”