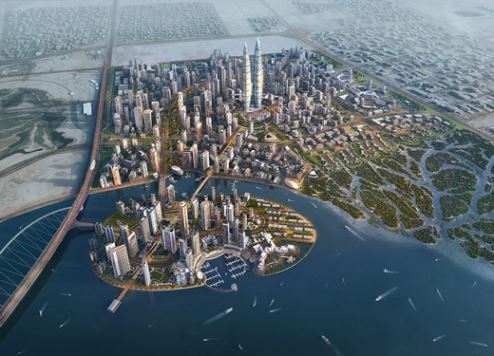 A new tower to rival some of the world’s leading iconic buildings has been approved by Dubai’s Ruler, His Highness Sheikh Mohammed Bin Rashid Al Maktoum.

It will become the centerpiece of the new Dubai Creek Harbour at The Lagoons project.

The tower’s height and name are yet to be revealed, but the developer said it would be “comparable in greatness and in height” to Dubai’s Burj Khalifa and the Eiffel Tower in Paris.

The building has been designed by Santiago Calatrava Valls, a Spanish/Swiss architect, who has worked on the World Trade Centre Transportation Hub in New York, the Spire Tower in Chicago and the Olympic Sports Complex in Athens.

The ambitious Dubai Creek Harbour at The Lagoons project is also set to feature the highest twin towers in the world, as well as a sphere-shaped dining venue at the end of a pier that extends into the creek.

The development, which is located near to Dubai International Airport, will include 3,664 office units, 8 million square feet of retail space, 39,000 residential units and 22 hotels with 4,400 rooms.

The project will take 18 months to complete and will cost around US$817 million to build.

The venue includes an entertainment area for children and will also house gourmet food truck services.