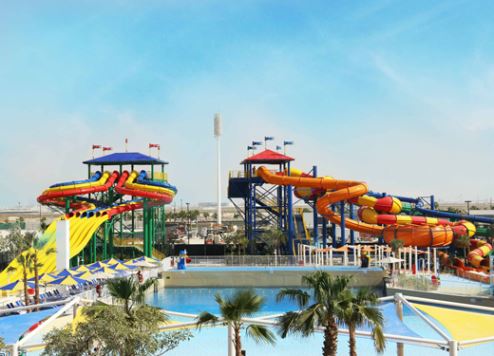 It’s the only water park in the Middle East designed for families with children aged from two to 12, and features more than 20 water slides and attractions.

Highlights include the highly anticipated Build-A-Raft River, where families customise their own raft using LEGO soft bricks, before floating down a lazy river.

Continuing the interactive fun, Build-A-Boat invites children to build their boat model using countless LEGO bricks before testing their design against the gentle flow of water in a 10-metre river.

Families can enjoy many rides together, including Red Rush, where they can take a family-sized raft down a 312-foot-long curving track on an 11-foot wide half pipe.

The park is located next to LEGOLAND Dubai, which opened last October. Together, the two parks feature more than 60 interactive rides, water slides and attractions.

Dubai Parks and Resorts also features MOTIONGATE Dubai – a unique theme park showcasing some of Hollywood’s most beloved characters from DreamWorks Animation, Sony Pictures Studios and Lionsgate and Bollywood Parks Dubai, the first-ever theme park based on the sights and sounds of Bollywood.

The entire destination is connected by Riverland Dubai – a retail, dining and entertainment walkway. Guests can stay at the Lapita Hotel, a Polynesian-themed family hotel part of the Marriot Autograph Collection.

Expected to open in late 2019, Six Flags Dubai will be the destination’s fourth theme park and the region’s first Six Flags theme park.