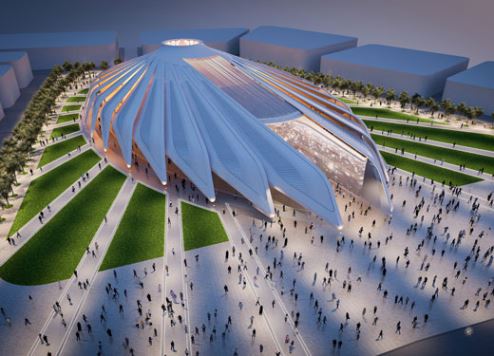 Preparations for the Middle East’s first Expo, which will be staged in Dubai in 2020, are ramping up with work on major pavilions now under way and new partnerships being forged

At the end of 2017, Dubai took another major leap forward in its preparations for Expo 2020.

The foundations of the futuristic falcon-inspired UAE pavilion were laid by His Highness Sheikh Ahmed bin Saeed Al Maktoum, chairman of the Expo 2020 Dubai Higher Committee and Dubai Civil Aviation Authority and CEO of Emirates Group.

The ground-breaking ceremony was also witnessed by Dr Sultan bin Ahmed Sultan Al Jaber, Minister of State and chairman of the National Media Council (NMC), and Reem bint Ibrahim Al Hashimy, Minister of State for International Cooperation and director general of the Expo 2020.

“The UAE pavilion will undoubtedly be one of the most prominent attractions of Expo 2020, drawing in many millions to witness its futuristic design. It will be a wonderful opportunity to share our Emirati culture and achievements while showcasing our ambitious vision for the future,” HH Sheikh Ahmed commented.

“The pavilion will be an architectural marvel that all seven Emirates can rightly take pride in, both now at the ground-breaking stage, during Expo, and in legacy when it will become a lasting icon of our nation.”

The pavilion is being built by Arabtec Construction, a subsidiary of Arabtec Holding, which won the contract after competing with various national and international companies.

The National Media Council has been responsible for building and operating the UAE pavilion at all international Expos since the entity’s inception in 2006.

Dr. Al Jaber says the UAE pavilion is “a prominent landmark” at the Expo site, which will “be the main attraction for millions of visitors from all around the world”.

“The pavilion showcases the history of the UAE, which stretches over thousands of years, and tells the story of our wise leaders, their vision and their achievements that have transformed the UAE into an international role model,” he continues. “At the same time, the structure will introduce visitors to the UAE’s ambitious aspirations for the future, all the way till 2071.”

The UAE pavilion’s architectural design resembles a flying falcon and is designed to promote the values of openness, communication and tolerance. Once completed, the pavilion will span an area of more than 15,000 square metres across four floors including a 1,717-square-metre top floor dedicated to hospitality and a 588-square-metre mezzanine floor to house support units.

The entire structure is expected to be completed by the end of 2019.

The design – conceived by architect Santiago Calavara – was approved after a seven-month competition in which nine international firms submitted 11 concepts, with the entries evaluated for the extent to which they embodied the main themes of the Expo and their representation of UAE heritage.

“The pavilion will leave a lasting impression on the UAE landscape, showcasing our rich culture, our journey as a nation and our development and leadership in many fields,” says Reem Al Hashimy. “It will introduce millions of people to our history, as well as the future aspirations that we seek to achieve with our leadership’s vision and through cooperation with other nations.”

Just days after the pavilion’s ground-breaking ceremony took place, a delegation from the Principality of Monaco pledged the state’s commitment to showcasing its innovation and new technologies at Expo 2020 Dubai.

Monaco is one of more than 160 nations that have either publically or privately confirmed they will take part in Expo 2020 Dubai.

One of the most densely populated sovereign states in the world, Monaco will showcase its expertise in art, gastronomy, hospitality, research, industry, new technologies and the luxury sector.

The Monegasque pavilion will express its identity and engage its visitors through an exciting activity programme, including shows, conferences and exhibitions throughout the six-month Expo.

“Expo 2020 will offer us the opportunity to present a 360-degree view of our country,” says Croesi. “We will be able to exchange knowledge and expertise with governments and businesses alike, and highlight Monaco’s strengths that make it a hub of connection between ideas, individuals and technology.”

The relationship between Monaco and the UAE extends to trade and economic cooperation. In July, a trade mission headed by His Excellency Sultan bin Saeed Al Mansouri, UAE Cabinet Member and Minister of Economy, visited the Principality of Monaco to facilitate economic cooperation and further explore trade and investment opportunities between the countries.

Through its overall theme, ‘Connecting Minds, Creating the Future’, Expo 2020 Dubai will be a celebration of ingenuity that provides a platform to encourage creativity, innovation and collaboration, underpinned by its three subthemes: Opportunity, Mobility and Sustainability.

The event will run for six months from 20 October 2020 to 10 April 2021 and is anticipated to receive 25 million visitors, with 70% of this number expected to come from outside the UAE, the largest proportion in the history of World Expos. More than 180 countries are expected to take part in the event, with further national participation announcements expected in the coming months.