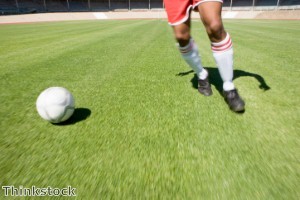 A clutch of footballing legends are expected to take part in the 3rd Dubai Indoor Football Championship in July.

Top European teams including Barcelona, FC Porto, Roma and Real Madrid will be joined by sides representing the UAE, Morocco, Algeria and Egypt in the event, which will take place at the Dubai World Trade Centre (DWTC).

The Dubai Sports Council (DSC) believes the event - which will be held between July 2nd and 6th - will raise the profile of football in the Middle East even further.

'We hope this event encourages residents to be passionate about football and sport in general.'

He added that tournaments of this nature help to promote physical activity and inspire future homegrown stars.

Ahmed Alkhaja, senior vice president of venues at DWTC, told the Khaleej Times that the Dubai Indoor Football Championship has been a great success since its inception.

He believes the emirate has enough top-class sporting facilities to host events of this nature and this tournament will be the showpiece of the Dubai Sports World (DSW) initiative, which is aimed at getting local people involved in various games.

DSW is the largest indoor sporting event in the Middle East and Mr Alkhaja thinks this year's version will be bigger and better than ever.

Earlier this week, the leaders of the Arsenal Soccer Schools Dubai scheme revealed that around 5,000 youngsters have been coached by former Premier League star Ian Selley and his team since the programme was first launched in 2009.