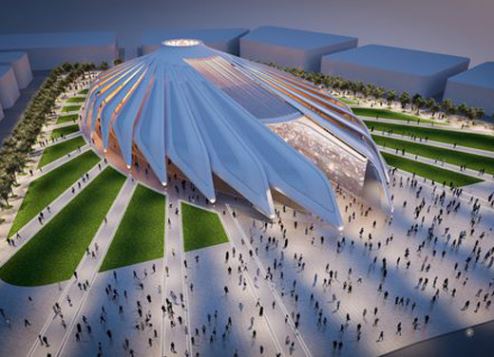 Dubai is renowned for its modern architecture and iconic buildings and the World Expo 2020, which will take place in the city from October 2020 to April 2021, looks set to further demonstrate the emirate’s prowess in this field.

Last week, striking designs for the event’s UAE Pavilion were unveiled after the UAE’s National Media Council announced Spanish architect Santiago Calatrava would be taking on the project.

His design for the pavilion, which will face the Al Wasl Plaza in the centre of the 200-hectare exhibition zone in Jebel Ali, is inspired by a falcon in flight.

“The proposed design of the UAE Pavilion captures the story we want to tell the world about our nation,” said Dr Sultan Ahmed Al Jaber, Minister of State and chairman of the National Media Council.

"Our late founding father His Highness Sheikh Zayed bin Sultan Al Nahyan used falconry expeditions to forge connections between tribes and to create a distinct national identity which ultimately led to the founding of the United Arab Emirates.

"Now, the falcon design will symbolise how we are connecting the UAE to the minds of the world and how as a global community we can soar to new heights through partnership and cooperation.”

The contest saw nine of the world’s most respected architectural firms submit 11 concepts, a statement said.

Reem Al Hashimy, Minister of State for International Cooperation and director general of Expo 2020 Dubai, said the UAE Pavilion, which is expected to span some 15,000 square metres and include numerous exhibition areas, an auditorium, food and beverage outlets and VIP lounges, would be one of the Expo's greatest icons.

She added: “The design will evoke the pioneering spirit and power of connections that transformed the UAE from a collection of small, desert communities, into a global connection point.

“The UAE pavilion will become an important cornerstone in our site and will have a legacy plan that will reflect our hopes and ambitions for the many years to come.”

But it’s not just the UAE Pavilion designs that have been given the green light.

The theme and title of World Expo 2020 is Connecting Minds, Creating the Future, and designs from three architectural firms were recently selected to represent the event’s core sub-themes: Mobility, Sustainability and Opportunity.

Following a long-running international architecture competition, it was announced in March that companies from Denmark and the UK had been selected to design these three pavilions, which like the UAE Pavilion, will surround Al Wasl Plaza.

The winning designs, three of 10 submitted, successfully integrate flexibility and longevity in order to ensure the 438-hectare Expo site remains a functional national landmark after the event has finished in 2021.

OPPORTUNITY
Danish company Bjarke Ingels Group (BIG), which operates out of New York, has been selected to design the Opportunity Pavilion, which is said to be “influenced by a belief that contemporary urban life is shaped by a confluence of cultural exchange, global economic trends and communication technology”. The pavilion is being built around the premise of “unlocking new possibilities for people and communities to become successful contributors to the future”.

MOBILITY
London-based firm Foster + Partners, already well-known to the UAE market for its work on the under-construction Zayed National Museum in Abu Dhabi, Masdar City, and Brookfield Place in Dubai, has been charged with the task of designing the Mobility Pavilion. It will build a tiered trefoil-shaped building, surrounded by an illuminated plaza, in line with its brief to develop a hub that inspires “smarter and more productive physical and virtual connections”.

SUSTAINABILITY
The Sustainability Pavilion will be brought to life by eco-architectural outfit Grimshaw, the UK-based company that pioneered the iconic Eden Project located in South-West England. The Expo’s ‘green’ pavilion will be built with the following powerful message in mind: “pursuing our hopes of progress without compromising the needs of future generations”.

“After careful study and consideration, three designs stood out, amidst tough competition, as great future structures that will mark our Expo as exceptional.”