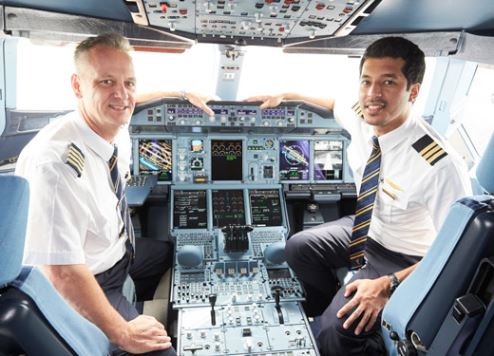 Emirates has released the world’s first 360-video tour of the A380 cockpit.

Viewers can watch Captain Thomas Ziarno from New Zealand and First Officer Abdulrahman Mohamed Al Busaeedi from the United Arab Emirates, provide an immersive 360-view tour of the flight deck controls of an Emirates A380, the world’s largest commercial aircraft.

The 360-video experience can be viewed from a mobile device and navigating with the touchscreen. For viewers using a desktop, they can click and drag the video to view the cockpit from any angle.

Emirates operates the world’s largest fleet of A380s, with 80 in service and a further 62 on firm order, 21 of which will join the fleet this year.

The airline took delivery of its 80th A380 earlier this month. This will be followed by the launch of a daily A380 service to Vienna, the capital of Austria, on 1 July.

This will be Emirates’ 41st A380 destination.

Emirates operates one of the youngest aircraft fleets in the industry with an average age of 5.6 years. More than 4,000 pilots from nearly 100 nationalities fly the Emirates fleet of 250 all wide-body aircraft that serve 155 destinations across 81 countries.

The airline is hiring at least 700 pilots in 2016 to operate its expanding fleet and will be holding multiple recruitment events across the globe to support pilot recruitment.