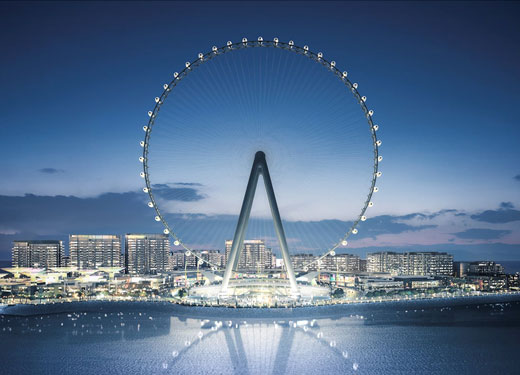 While Bluewaters Island is now open to public, its star attraction, Ain Dubai, which at 200 metres tall is the world’s largest Ferris wheel, remains on track for a late-2019 launch, according to authorities. Located off the coast of Dubai Marina near Jumeirah Beach Residences, the imposing Ain Dubai will provide unparalleled views of Dubai’s iconic coastline and buildings, including Burj Al Arab and Burj Khalifa, as well as the Marina skyline itself.

This landmark tourism destination, which is being built at a cost of $1.7 billion, will be located on two man-made islands currently under construction adjacent to the world-famous Burj Al Arab, which is also scheduled for its first major refurbishment in 20 years in 2019.  One island will be dedicated to entertainment and family tourism while the other will house luxury villas and a private marina. Other highlights of the development include a new and improved Wild Wadi waterpark, a marine park, more than 400 F&B outlets, and a 1,700-seat theatre that will house Cirque de Soleil.

Dubai Creek Harbour will be home to the city’s tallest tower, the $1 billion Dubai Tower, when it is completed in 2020. Developer Emaar revealed this month that the precinct would welcome its first residents in early 2019. The 6 million sq metre development will be twice the size of Downtown Dubai when it is finished and will feature waterfront eco-resorts, a marina and yacht club, as well as vast commercial and retail space.

Originally scheduled to open in 2018, the $272 million Mohammed bin Rashid Library has been dubbed the largest cultural project in the Arab world. Housed in an incredible building shaped like an open book, the seven-storey facility will span more than 650,000 sq feet and house more than 4.5 million print, audio and electronic books. It will have the capacity to welcome 42 million visitors annually.

Dubai is spending billions preparing for what it claims will be the greatest expo in the event’s esteemed history. In addition to a dedicated site that will host the event in Dubai South, the city’s authorities have committed to extending the existing Dubai Metro service, expanding Dubai World Central Airport, and increasing the city’s hotel room inventory to cater to the more than 25 million visitors it expects the event to attract over its six-month duration.

This 15.3 square kilometre waterfront city currently under development in Dubai is spread across four manmade islands. When fully completed in the mid-2020s, it will add 40 kilometres of coastline including 21 kilometres of prime beachfront real estate to the city’s geography. Highlights will include the Deira Night Souq – a modern interpretation of the traditional Arab souq, or market – 5,300 retail outlets, multiple hotels, and a new waterpark.