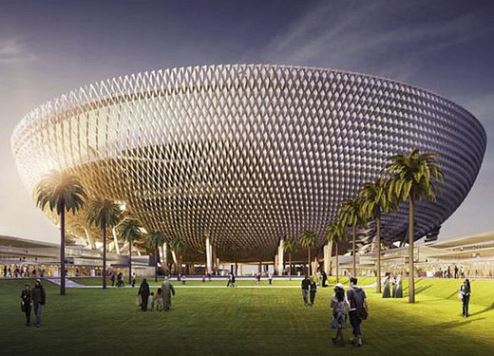 The new state-of-the-art facility, which will cost an estimated AED 3 billion to build, will provide capacity for 60,000 spectators, according to a recent Dubai Media Office statement on Twitter.

His Highness Sheikh Mohammed bin Rashid Al Maktoum, Vice President and Prime Minister of the UAE and Ruler of Dubai, recently reviewed and approved designs for the stadium at the Sports Innovation Lab event, organised by the Dubai Sports Council at the city’s Meydan Hotel.

The Mohammed bin Rashid Stadium will be located in the Al Aweer area of Dubai behind Mushrif Park and is the first project of a nine-point plan designed to revolutionise how sport is played in Dubai.

Dubai Media Office images showed the facility had been crafted to replicate a half-ball shape that is elevated above ground level.

No completion date has been given for the stadium but it has confirmed that it will be fully air-conditioned, ensuring it is usable all year round.

It complies with football governing body FIFA’s standards and will also include a training hall and a 5,000-space car park.
The Sports Innovation Lab event also staged workshops on health and the community, events and sports tourism, the future of sports, sports infrastructure, and women and sports.

Plans for a Sheikh Hamdan bin Mohammed Award for excellence in school sports were also unveiled, as well as the Sheikh Hamdan Initiative for Community Sport, a state-of-the-art Dubai International Sports Medicine Centre, a museum, and a Champions of Academies Programme.