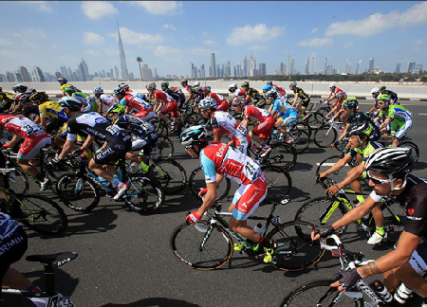 How the emirate is appealing to amateur and professional cyclists alike with a raft of world-class tracks, facilities and competitive events

Cycling is a sport that has taken the world by storm, dominated by middle-aged men in Lycra (MAMILs) to the point where it’s been dubbed the new golf.

Dubai has been quick to jump on this trend, ploughing millions of dirhams into facilities designed to promote the sport for leisure and competitive purposes.

Just last week Dubai’s Roads and Transport Authority (RTA) awarded contracts for the construction of cycling and running tracks at five destinations across the emirate as part of its strategy to encourage active lifestyles.

Cycling tracks covering 57km will be built in the next year at Warqaa, Mushrif, Mirdif, Mizhar and Khawaneej, with AED 79 million being invested in this infrastructure.

“It also ensures that the infrastructure of residential districts is conducive to the practicing of sport as it has immense health benefits for community members.”

To date the RTA has constructed cycle tracks extending more than 178km across Dubai.

The aim is to not only promote cycling as a sport, but as an alternative to other forms of motorised transport.

The RTA also plans to roll out dedicated cycling lanes spanning the entire emirate to be used as an environmentally-friendly means of transport.

A cycle path is nearly complete at Dubai Marina that will serve Dubai Tram users.

The RTA has also provided bike racks for cyclists at the Metro stations of both the Red and Green lines.

It’s all part of the the emirate’s bicycle masterplan that will feature cycling paths connecting communities to beaches, malls and parks, as well as to the various public transport areas such as the metro and tram stations.

The target is to deliver 900km of cycle paths by 2020, which the RTA says it’s well on the way to achieving.

Meanwhile, Dubai has established itself on the professional cycling circuit and last week officially launched the third edition of the Dubai Tour, which will take place from February 3 to 6.

British Olympic champion and Tour de France winner Bradley Wiggins will lead a star-studded peloton in the 2016 event, which each year attracts thousands of spectators.

The February race, which will see 16 teams take part, will be the longest yet in terms of distance, with the four stages covering a distance of 671km.

“I’m really excited to be racing with my team at the 2016 Dubai Tour,” says Wiggins. “It’s an exciting event and we’re looking forward to competing with some of the best teams in the world.”

The race will start at Dubai International Marine Club (DIMC) with stage one running through Sharjah and Ras Al Khaimah and ending in Fujairah.

Stages two and three will take in Dubai’s tough desert terrain, Dubai Marina, The Palm Jumeirah and a steep climb at Hatta Dam. The Tour will conclude with the 132km Burj Stage, which starts at DIMC and ends at Burj Khalifa, taking in the emirate’s key landmarks along the way including Meydan Racecourse, Al Mamzar beach, Maktoum Bridge, Old Town, the Union Flag and Burj Al Arab.

“Our research points to certain segments of the market where participation, consumption and media interest in all things cycling are on the up.”

Pillai says there is an opportunity to provide high-performance cycling products in the Middle East.

But he’d better be quick as many entrepreneurs are jumping on this trend.

Earlier this year, the region’s first women-only bicycle shop, Liv, opened its doors in Dubai’s Box Park on Al Wasl Road, Jumeirah, and there are more planned, such is the sport’s growing popularity.