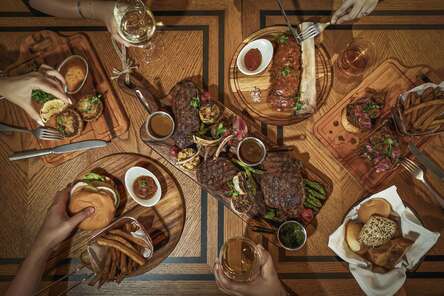 While Dubai already ranks among the world’s most popular tourism destinations, the recent launch of a new strategy by Dubai’s Department of Economy and Tourism (DET) aims to establish the city among the most sought-after foodie destinations, eclipsing the likes of New York, Paris and London for gastronomic appeal. Dubai is already home to almost 10,000 F&B outlets, from homegrown eateries and neighbourhood cafes to Michelin-starred fine dining restaurants, and was recently declared the world’s fourth-best destination for food lovers in TripAdvisor’s 2022 Travellers’ Choice Awards, which are judged by millions of TripAdvisor users worldwide. Dubai ranked ahead of Barcelona, New York, Bangkok and Singapore in the list, which are all known as favourite destinations among food-loving travellers.

Dubai is already well established as the top gastronomic destination in the Middle East. In the 2022 edition of the Middle East & North Africa’s 50 Best Restaurants awards, Dubai claimed six places in the top 10 and 16 of the top 50. Acclaimed casual dining restaurant 3Fils, located in Dubai Fishing Harbour, claimed overall honours as the MENA region’s best restaurant.

Dubai is also the only city in the Middle East to boast its own prestigious Michelin Guide, and also features prominently in the UAE edition of the famed Gault&Millau guide, which launched in 2021 and has since become an unrivalled source for unbiased, independent restaurant reviews. Given the growth of food tourism worldwide, it is little wonder that DET has placed the sector at the heart of its broader tourism growth plans for the next decade.

According to a 2022 report published by Research and Markets, the global food tourism market was valued at US$696.5 billion in 2021 and is projected to expand at a compound annual growth rate (CAGR) of 17.4 per cent to be worth $1,796.5 billion in 2027. Dubai is already home to the region’s largest annual food festival, which attracts thousands of food lovers each year and is embraced by all stakeholders in the city’s F&B sector. The 2022 event, staged in May and coinciding with Eid Al Fitr, featured a huge range of promotions and initiatives, from exclusive Chef’s Table experiences to dining discounts, citywide competitions and foodie adventures. In 2021, DET also launched its ‘Gastronomy Always On’ (GAON) campaign, which aims to support the F&B industry through the development of a year-round calendar of culinary events and initiatives.

DET efforts to promote Dubai as a global foodie capital spells good news for The First Group’s investors, given the firm’s commitment to establishing its fast-growing portfolio of hotels as gastronomic destinations in their own right.
The First Group’s award-winning lifestyle hotels, The First Collection at Jumeirah Village Circle and The First Collection Business Bay, alongside others in its portfolio that include Wyndham Dubai Marina, TRYP by Wyndham Dubai and Millennium Place Marina, are home to some of the city’s most-exciting and popular restaurants, bars and cafes.
From MasterChef, the TV Experience – the first restaurant in the world based on the global reality TV phenomenon of the same name – to the American smokehouse restaurant The Blacksmith Bar & Eatery, Spanish taverna Lola Taberna Española, Latino-inspired Santè Ria, Mediterranean-themed Soluna Restaurant & Lounge, and Japanese street-food inspired Ikigai (生き甲斐), The First Group’s F&B portfolio reflects the diversity and excitement of the city in which they operate.
The popularity of these venues have helped consolidate The First Group’s reputation as one of the UAE’s leading hotel and hospitality operators, and put their hotels on the map as leading lifestyle destinations in their own right.