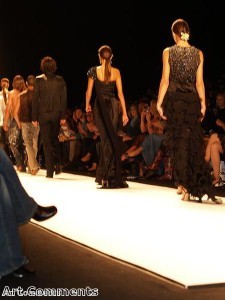 Dubai has taken steps to become a recognised player in the fashion industry by hosting an elaborate show that is being celebrated by those from the sector.

Franca Sozzani, the editor of Vogue Italia, has described the event as an “ultimate celebration of everything fashion and the ultimate showcase for upcoming designers”, suggesting the emirate has been successful in changing the world’s perception of it is as merely a hub for business.

Over 20 established fashion designers took part in the Vogue Fashion Dubai Experience, which ran from October 30th to November 1st, as well as eight individuals who aspire to be successful in the industry.

Robert Booth, a member of Dubai Design and Fashion Council, commented: “Fashion is a $275 billion (£171.9 billion) industry for centres like New York, London, Paris, etc and now Dubai has also entered this league.

“Twenty per cent of all luxury sales take place in Dubai and 50 per cent of them happen in Dubai Mall, the premier international lifestyle retail attraction on the planet visited annually by over 75 million people. It makes this city a leading fashion destination in the world for luxury brands. We can now expect an additional 100 million visitors and it can only get bigger from here on.”

Ms Sozzani described the emirate as being the best place to start when it comes to supporting a younger generation of designers and sharing knowledge, as it is the most visited place in the world for retail.

The Vogue editor explained that Dubai is the perfect platform to reach out to consumers that are surrounded by big brands, allowing young designers to take on an international approach to their work.

Dubai - a place that is famous for its architectural firsts and record-breaking feats - may soon become synonymous with the world of fashion and could be grouped with New York, London and Paris in terms of its attachment to the industry.