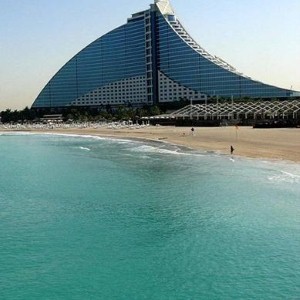 7Days reports officials decided to undertake the scheme after being left with 15 out-of-date tanks. They were either faced with the choice of selling the unwanted machines for AED 250,000 (£40,818) or sending them beneath the waves at a cost of AED 150,000.

The project was the first of its kind in the UAE, following similar environmentally-friendly schemes in the US, Australia and Thailand. They were placed on the sea bed near Dubai's World Islands, with officials claiming the programme had already created a brand new ecosystem.

Cranes were used to lower the vehicles under the water, following extensive work to remove all traces of oil and dust from the machines before they could be submerged. Major Rashed Almahairi of Dubai police commented: 'That meant getting rid of wheels, axels, engines - even the gearbox inside in case there was some oil. Just the shells of the tanks remained.'

This operation was carried out to satisfy requirements set out by the Ministry of Environment, which felt the presence of any potentially-harmful material could have an adverse effect on the project.

The new ecosystem has attracted a large number of smaller fish, who have attached themselves to the vehicles to feed. This in turn has provided a plentiful supply of food for larger creatures.

According to officials, the tanks will remain submerged for around 20 to 30 years. During the opening of the Dubai International Boat Show, Almahairi likened the project to the creation of an 'oasis in the sea', while others involved in the scheme believed it was a key part of the fight to improve marine life in the area.

The initiative, which was carried out in conjunction with the Dubai municipality government and the Ministry of Environment, has been running for the past year. Control of the scheme was officially handed over to the emirate's Marine Environment Protection Agency today (March 5th).