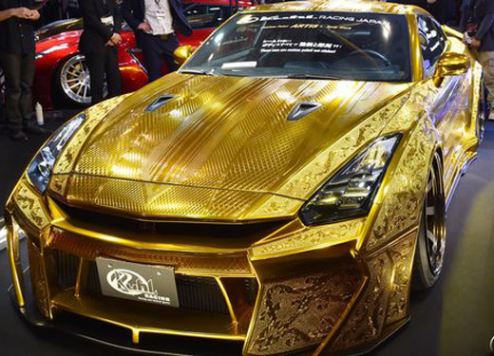 A gold-plated car worth US$1 million has been unveiled in Dubai.

Showcased by Kuhl Racing, a Japanese sports car firm that specialises in customisation, the car is covered with a gold paint sheen, applied and engraved by Japanese body-shop artist Takahiko Izawa.

Automechanika Dubai is the largest trade exhibition of its kind in the MENA region, showcasing the latest automotive technologies.

Dubai has earned a reputation for being home to some of the most exotic autos anywhere in the world.

The four-wheel steering, all-wheel drive supercar is a first in the history of the Italian carmaker and was inspired by the 1970 Ferrari 365GTC4.

Ferrari says the GTC4 Lusso is designed to be an “every day” luxury sports car.