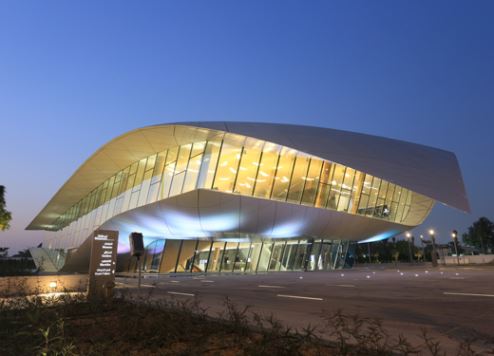 Etihad Museum – open now This world-class museum, which opened in January, tells the story of the founding of the United Arab Emirates. Fittingly located next to Union House, where the signing of the treaty establishing the UAE took place in 1971, the museum’s design emulates the waves and folds of a manuscript, with seven columns built to resemble the pens used to sign the original declaration. For visitors looking to take a deep dive into the history of the nation, Etihad Museum offers a plethora of resources. Comprising eight permanent pavilions covering the Union’s key moments, a walk through the museum complex brings the nation’s historic narrative to life: from a documentary film about the history of the UAE, to an interactive map and timeline illustrating the area before the formation. Location: 2nd December Street/Jumeirah Road

La Perle by Dragone – opening soon The region’s first permanent stage show, which goes live at Al Habtoor City this summer, will be epic. The venue will feature a custom-built 1,300-seat aqua theatre with a pool filled with 2.5-million-litres of water. The live performance itself will feature 65 artists from 23 countries staging stunts including 35-metre dives and aerial manoeuvres around the auditorium on high-powered winches. The high-octane production will be specially-scripted for Dubai and is a one-of-a-kind draw for families as well as tourists to the city. Move over Las Vegas and Macau! Location: The Atrium, Al Habtoor City

Deira Islands – Q4, 2017 The road network leading to Dubai’s latest offshore island development, Deira Islands, is already open, with the project on track to be launched by the end of the year. Four offshore islands covering 23.5km of coastline and boasting 8.5km of beaches will feature several tourism attractions including the Deira Night Souq – a modern interpretation of the traditional Arabic souq, which will be located next to Deira Mall. Deira Islands, which will be accessible by road or by water, is set to become a retail haven for residents and visitors alike with 5,300 shops spread along a 1.9km stretch of pristine waterfront. A new waterpark plus several hotels are planned too. Location: Deira Islands, Dubai

The Crystal Lagoon – 2017 date TBC The Crystal Lagoon is a major focal point of Dubai’s newest residential area, Mohammed Bin Rashid Al Maktoum City (MBR City). When completed this year it will hit the record books as the world’s largest crystal clear lagoon. The first stage of the lagoon is already operational – it has been flooded and covers a surface area of 1.4 hectares at a depth of 2.45 metres – but it will eventually feature a series of interconnecting lagoons to form the world’s largest manmade lagoon. A 237-metre manmade sandy beach will line its shores. Location: Mohammed Bin Rashid Al Maktoum City, Meydan

The Dubai Eye, Bluewaters Island – 2017 date TBC Dubai will bag another world record this year when it unveils its latest tourism destination – the US$1.6 billion Bluewaters Island. The new offshore development, which is situated just off the Jumeirah coastline, will be home to the world’s tallest observation wheel, aptly titled Dubai Eye or Ain Dubai (TBC). The attraction, which will stand at an impressive 210 metres, will provide guests with unrivalled views of the Palm Jumeirah and the Dubai skyline. It will carry 1,400 passengers in its 48 capsules and is expected to receive up to three million visitors annually. Shops, restaurants and hotels are also being built on Bluewaters Island, which is connected to the mainland by a bridge. The first Madame Tussaud’s Dubai is also planned and will be located adjacent to the Ferris wheel. Location: Bluewaters Island, Jumeriah Beach Residence

Dubai Safari – Q3, 2017 When it opens this autumn, the 119-hectare Dubai Safari will house more than 10,000 animals, including 350 rare species. Most of them are already on site acclimatising to the desert environment in the lead-up to the grand opening. Providing a safe habitat for its wildlife, enclosures feature air-conditioned rocks, chilled pools and misting machines to keep the animals cool over the summer months. The attraction will comprise an Arabian village, Asian village, African village, Americas village and Australia village, while other features include a large 1,000-seat theatre. The main experience, however, will be the safari, allowing guests to view the animals from the comfort of air-conditioned jeeps on an hour-long adventure. Location: Al Warqa, opposite Dragon Mart

Dubai Crocodile Park – Q4, 2017 Located close to Dubai Safari, Dubai’s very own crocodile park will be home to hundreds of crocs, providing the ideal environment for their growth, development and reproduction. Nile crocodiles we will housed here – the largest freshwater crocodile species in the world. The 20,000-square-metre park is already 50 percent complete and is scheduled to receive its first visitors before the end of 2017. Location: Al Warqa

Dubai Frame – opening soon Rising to a height of 150 metres, this window-frame-shaped attraction in Dubai’s Zabeel Park is being built at a cost of US$43.5 million. The highlight of Dubai Frame is its 93-metre-long suspended glass-floored viewing platform, providing visitors with breathtaking vistas of Old Dubai on one side and New Dubai on the other. It’s destined to change the way the city is viewed, offering a new perspective on this exciting city. Location: Zabeel Park

Museum of the Future – opening soon The Museum of the Future was first conceived four years ago under the leadership of His Highness Sheikh Mohammed bin Rashid Al Maktoum, Vice President and Prime Minister of the UAE and Ruler of Dubai. It has developed into a world-leading platform for new technology designed to change the way we live, with a focus on the environment and climate change, energy, education, transport, healthcare, security and housing. Earlier this year Sheikh Mohammed launched the museum as an incubator for innovation, kick-starting the development of a permanent futuristic oval-shaped building that’s being built at a cost of AED500 million (US$136 million). Its construction will involve 3D printing technology. Location: Sheikh Zayed Road, close to Emirates Towers

Dubai Water Canal expansion – ongoing The Dubai Water Canal project was launched at the end of last year, effectively transforming Business Bay and Downtown Dubai into islands. But there is much more to come with hotels, restaurants and leisure attractions planned that will transform this impressive waterway into a tourism destination. Work is already under way on the US$272 million Marasi Business Bay marina, the first phase of which is set for completion in Q3 this year. The mixed-use destination will eventually feature floating restaurants plus 800 berths and will become the region’s first purpose-built yacht club. Location: Dubai Water Canal