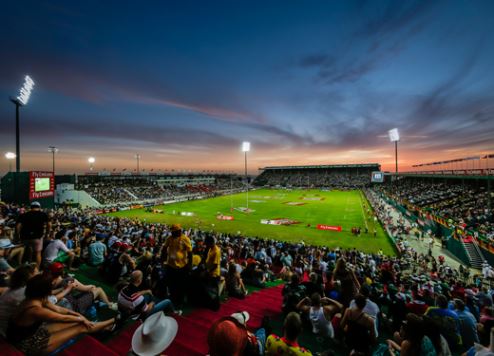 As the Dubai events season gets in full swing, we highlight the sports and entertainment events worth marking down on your calendar

Dubai Duty Free Tennis Stadium and The Irish Village kick off their live music event season with one of the most prominent bands of the late 1970s and early 1980s, Madness! Hailing from Camden Town, London, England, Madness are a ska band that formed in 1976. They are one of the most enduring and beloved English acts and quite possibly the world’s biggest 2-Tone band.The exciting upcoming tour will see the band showcase new tracks from their forthcoming album as well playing all their classic hits and fan favourites.

Emirati singing sensation Hussain Al Jassmi will perform live at Dubai Opera as part of the new attraction’s inaugural season. The superstar has amassed more than 500 million views on YouTube and is most famous for his hits Fegadtek, Ma Yeswa and Bawada'ak. Witness the merging of traditional Khaleeji and modern Arabic beats with Dubai Opera’s state-of-the-art acoustics, as Hussain regales the audience with his smooth voice and innovative fusion music.

Brian McFadden and Keith Duffy, part of the multi-platinum, record breaking bands, Westlife and Boyzone, joined forces earlier this year to create Boyzlife. The UK-wide tour sold out within hours and now – due to phenomenal demand from their international fans – they are heading to venues across the globe, with dates confirmed in the UAE, South Africa and Europe. The international tour, in partnership with Hilton Hotels & Resorts, will give fans the opportunity to hear the stories behind the headlines during their meteoric rise to fame, with an intimate evening of stories, laughter and music. Boyzlife is the thrilling untold story of life in two of the world's biggest boybands, with the lifelong friends walking the audience through their lives - captivating tales of the highs, the lows and of course a series of intimate performances, including a selection of the biggest hits that forged their careers.

Watch the longest running play in history comes to life on stage at Dubai Opera, the city’s new cultural landmark in Downtown Dubai. This Victor Hugo musical, which portrays the struggles during the French Revolution, promises to tug at the heartstrings as Broadway actors belt out the classic tunes for which it is famous.

Join this exciting race night, part of the Racing Calendar at Dubai Racing Club. Running from November until the ‘big day’ itself, these races get you so close to the course you feel the ground shake as the horses thunder past. Enjoy VIP hospitality with perfect views of the track when you choose packages that combine a stay at Meydan Hotel, plus dining experiences and horseracing. You can also go behind the scenes and meet the horses at Meydan's Stables as they prepare for the big races.

The DP World Tour Championship is a world-class golfing and social event, and the final tournament of the European Tour Race to Dubai – a season-long competition spanning 45 tournaments in 26 destinations and across all five continents on the 2016 European Tour International Schedule. Now celebrating its eighth year, the championship hosts the top 60 golfers of the European Tour on the Earth Course at Jumeirah Golf Estates, Dubai.

The Emirates Airline Dubai Rugby Sevens is back and promises to be bigger and better than ever. The best players in the world will converge on The Sevens stadium for the three-day annual rugby extravaganza with awesome action and entertainment on offer, and fantastic fun activities for the whole family.

The Nutcracker on Ice, Dubai Opera

Set against a backdrop of colourful scenes and projections, opulent costumes, magic tricks and special effects, the cast of World, European and National Championship-level skaters dance to Tchaikovsky’s glorious score. Breathtaking high-speed leaps, heart-stopping throws and awe-inspiring acrobatics combine with sublime ice dance to make The Nutcracker on Ice a festive treat that will thrill and enchant all ages.

Elton John, the British music legend who has sold more than 300 million records worldwide, will perform live in Dubai in December. With more than 4,000 concerts under his belt, spread across five decades, the Rocket Man singer is one of the biggest artists of all time. A highlight of Elton’s performances is when he plays the piano on stage alone, accompanying his singing and improvising to his own score. The audience is guaranteed a mix of Elton’s greatest hits and lesser-known tracks from his older albums, making for a night to remember.