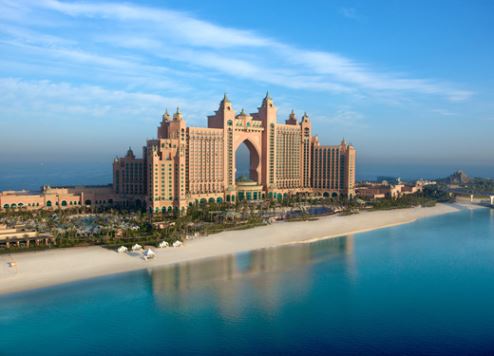 Data revealed by the popular app, which provided rankings according to the number of image uploads, saw the photogenic resort located on Palm Jumeirah compete with the likes of Tokyo Disney Resort, The Plaza Hotel New York and Universal Orlando Resort.

Sister property, Atlantis Resort at Paradise Island in The Bahamas, also made the list, as did other picturesque beachside resorts, luxury hotels and historic buildings in Hawaii, Ibiza and Miami.

Atlantis, The Palm has plenty of locations to take the perfect selfie, with backdrops including the hotel’s iconic towers and arch, the Aquaventure water park, and the Shark-infested waters of the Ambassador Lagoon – the largest aquarium in the Middle East and Africa.

And it’s not just regular guests who have caught the Instagram bug when staying at or visiting the property.

Celebrities who have been seen selfie snapping include notorious ‘It’ girls, Kim and Khloe Kardashian, who stayed in two of the resort’s signature suites, while UK soap and reality TV stars, Mark and Michelle Wright, posted photos taken at the aquarium.

Other Instagrammers to have taken photos at the hotel include supermodel Jourdan Dunn, Canadian rapper Drake and and Indian TV actor Ram Kapoor.