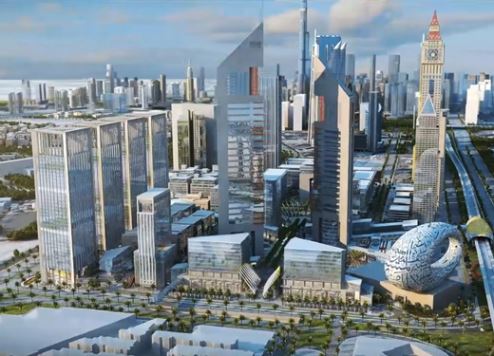 When completed, the development will become an integrated business precinct in the heart of Dubai’s financial district and will provide a legislative environment with international standards of governance and transparency under the regulations of the DIFC Authority.

The project has been considered in response to the increasing demand from international corporations looking to establish a presence in Dubai’s thriving economy.

WAM said the Emirates Towers Business Park would meet increasing demand for Grade A office space through high- and low-rise office towers, catering to a range of corporate requirements.

The development will also include three five-star hotels. The Jumeirah Group will manage one of those, while the other two will be operated by other well-known international hospitality groups, WAM added.

More than US$1.36bn is being invested in the Azizi Riviera project, which will be located alongside the new Dubai Canal waterfront and is part of Meydan One in Mohammed Bin Rashid Al Maktoum City (MBR City).

In addition to residential accommodation, the new suburb will feature its own retail district, which will include the Meydan One mall, due to open in 2020 with 620 outlets, as well as two hotels – one five-star, one four-star.