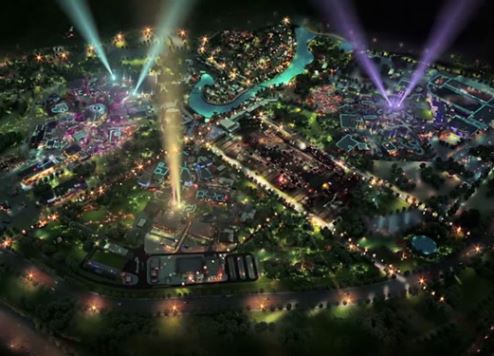 Dubai Parks and Resorts has released a video giving viewers a sneak peek of its three upcoming theme parks in Jebel Ali, Dubai, which are still on track to open in October 2016.

The video provides never-seen-before footage of Motiongate, Legoland Dubai and Bollywood Parks, which are currently under construction and connected by Riverland Dubai – a retail, dining and entertainment walkway.

“We will be opening three gates at the same time in 2016,” said Dubai Parks and Resorts chief executive Raed Al Nuaimi, who provides commentary in the video.

Bollywood Parks will feature five themed zones spread over three million square feet as well as the Rajmahal Theatre, which will stage live Bollywood shows. It is also home to VIP boxes and exclusive lounges for private events and galas.

Legoland Dubai, which will be the first Legoland in the Middle East, will include more than 40 interactive rides, shows and attractions spanning six themed lands — Lego City, Adventure, Lego Kingdom, Lego Create, Lego Factory, and Miniland.

The three-park development is expected to attract more than 6.7 million ticketed visits in 2017, its first full year of operation, generating an estimated revenue of $650 million (AED 2.4 billion) and creating more than 5,000 jobs.

Discover more about the thriving Tourism in Dubai. Let us be your guide! .