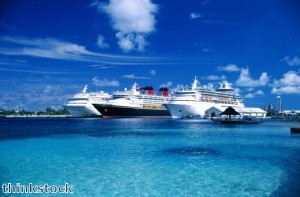 Dubai has opened a new 300,000 sq ft cruise terminal that will be large enough to accommodate 14,000 passengers every day, making it the world's largest, according to Sultan Ahmed Bin Sulayem, chairman of Dubai-based DP World.

This is the third cruise terminal in Dubai's port facilities at Mina Rashid.

Mr Bin Sulayem said: 'The new building will increase the handling capacity of the three cruise terminals in Dubai from two million tourists a year to seven million.

'The terminal is the largest and most modern cruise facility in the Middle East and the wider region, enabling award-winning Mina Rashid to now serve up to seven cruise vessels at one time and more than 25,000 passengers in its three cruise terminals.'

He added that the expansion came as a direct response from cruise lines and will enable these companies to increase the number of people onboard on trips to Dubai. This boost will help the emirate achieve its goal of attracting 20 million visitors every year by 2020.

According to Mr Bin Sulayem, the Department of Tourism and Commerce Marketing has predicted that there will be one million cruise tourists docking in Dubai in just five years' time.

The terminal was inaugurated last week by Sheikh Hamdan Bin Mohammed Al Maktoum, the crown prince of Dubai, on a day when the Costa and Aida had ships in port with over 4,000 passengers.

In honour of the prince, it has been named after him and will officially be known as the Hamdan Bin Mohammed Cruise Terminal.

Dubai is expecting a 19 per cent increase in the number of cruise passengers making their way to the emirate in the current 2014-15 season, with 381,000 visitors arriving on 110 cruise ship calls during this time.

Jyoti Panchmatia, general manager for the Gulf at Travco, told Gulf News that the industry is growing in the emirate, as ships entering the port are becoming fuller and more cruise lines are using Dubai for hub operations.