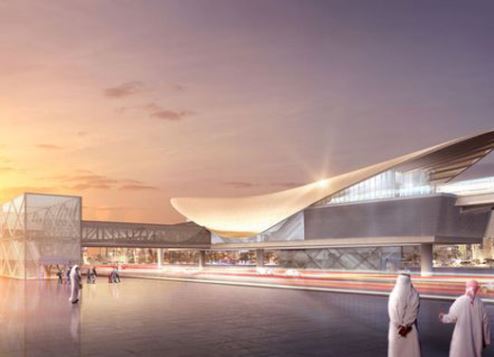 The first images of the planned Dubai Metro extension that will link the city to the World Expo 2020 site have been revealed.

The 14.5km-long Route 2020, which is an extension of Dubai Metro’s Red Line, will have five elevated stations based on the design of the existing metro stations but with additional elements inspired by aircraft wings in a nod to nearby Al Maktoum International Airport.

“Since the invention of an airplane brought an epoch-making change to human civilisation, in terms of the way people moved and communicated, we thought it [would] be apt to have the station designs inspired by the design of an aircraft,” said Mattar Al Tayer, director-general and chairman of the board of executive directors of Dubai’s Roads and Transport Authority (RTA).

Extension plans will see the route branch out from Nakheel Harbour and Tower station to the Expo 2020 site near Al Maktoum International Airport. On this section, 10.5km will be elevated, while 4km will underground, accessible by two underground stations.

The Expo 2020 station will have its own unique design, according to Al Tayer, with key features including huge, futuristic ‘wings’ that will overlook the Expo site.

“The expo station has been designed keeping in mind the requirements of the visitors to the Expo 2020 as well as future footfall,” he said.

“The design is at the same time modern and monumental, complementing the futuristic image of Dubai.”

Route 2020 will pass through several residential and commercial areas on its way to the Dubai 2020 site, including Discovery Gardens, Dubai Investment Park, Al Furjan and Jumeirah Golf Estates, serving an estimated population of 240,000.