Dubai Marina: From desert to delight | The First Group

Dubai Marina: From desert to delight 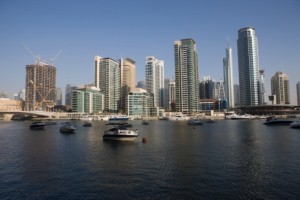 The Dubai Marina has come a long way since it was created in 2003. It has been transformed from a vast expanse of sand to a bustling centre for tourism. The area is full of residential towers, restaurants, bars, shops and hotels - with more appearing every month - making it the perfect place to for those looking to invest, work or socialise.

Those behind the project took inspiration from the Concord Pacific Place development along False Creek in Vancouver, Canada, before creating one of the world’s largest man-made marinas. Once the entire development is complete, it will be able to accommodate more than 120,000 people.

The Marina is home to everything a tourist or resident could ever need or desire, as it has a beach, shopping centres, restaurants and apartments. The area is easy to travel to as it was added to the Dubai Metro’s red line back in 2010, which means those staying in hotels in the region will also be able to explore the rest of the emirate during their holiday.

It is unsurprising that developers and investors have flocked to the Marina to take advantage of the prime location, with The First Group (TFG) being no exception as it has chosen the area to be home to the TFG Marina Hotel.

The hotel - to be operated as the Wyndham Dubai Marina - will be breathtaking upon its completion. The development will be sought after once it opens its doors because it will occupy a prime position in the region, which was named the most coveted district in 2012 and 2013 by PropertyFinder.ae.

According to TFG, the hotel marks a debut for the Wyndham brand in the UAE - something that it feels makes the project all the more lucrative. Wyndham Hotel Group is the world’s largest hotel company - with a portfolio of over 7,500 developments - and the reputation of the firm will see investors benefit significantly.

Once finished, the hotel will house 497 luxury rooms that are beautifully furnished to an incredibly high standard. TFG believes the opulent development will create a stir among investors as it will be a bustling hub for both business and leisure.

The development is running very smoothly, and everything has gone according to plan so far - keeping TFG and investors extremely happy. The construction update - released in May - states that block works have been completed and fit-out detail drawings have been issued to contractors for the pool and spa, gym, restaurant and tapas bar.

According to the property developer, the project caused a flurry of excitement upon its reveal, with many people looking to invest in the UAE making enquiries. Unfortunately, there are no VIP suites available for sale, as they were scooped up by investors who realised they'd stumbled upon a sound venture that would allow them to cash in on Dubai’s growing popularity among tourists and business travellers alike.

There is a possibility that TFG might do some upgrades on the new project to free up some inventory - but this has yet to be confirmed.

Guests at the hotel will have a myriad of leisure and entertainment facilities practically on their doorstep. There are a host of dining options available along the Marina Promenade offering a wide selection of fare, including Mexican, Thai and Arabic dishes.

Those tourists journeying to Dubai because of its world famous shopping experience - recently voted best in the world by TripAdvisor - will not be disappointed as they can take advantage of the wide range of retail outlets available at the Marina.

A short stroll away from the Wyndham Dubai Marina lies ‘The Walk’ at Jumeirah Beach, which is home to a selection of restaurants, clothing stores, boutiques, department stores, cafes and gyms.

The Walk is a hit with tourists and has a high rating in TripAdvisor, with one user, FrancisNorman, writing: “For a peaceful way to see some of the modern architecture of Dubai, the marina walk is hard to beat. It is away from the hustle of the city and the traffic of other areas and follows around the waterways of the marina area.”

Another happy visitor, SonalCG, posted: “A great place to spend the evening. The view is great and it's bustling with people. A definite visit to enjoy the outdoors while grabbing a bite or just for a walk.”

The Wyndham Dubai Marina is an investment that’s not to be missed as its premium location will attract tourists from all corners of the globe once the development is complete.