Dubai Mall profits up 50 per cent 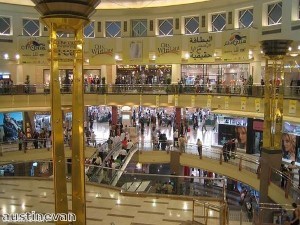 The Dubai Mall has experienced record high profits up 50 per cent for the third quarter of the year.

This is down to the six million people that pass through the centre's doors on a monthly basis almost three times bigger than the population of Dubai, which shows off the foreign interest and shopping that takes place in the emirate.

Speaking to the National, regional chief executive of The International Council of Shopping Centres David Macadam said: 'What it shows is that the mall is really working well. But what it shows more importantly is that the tourism, the infrastructure, the airport, the taxis, the power, the water - all of the infrastructure that's in Dubai that is world leading - is really working well.'

Most recently, many of the emirate's shopping centres have experienced a strong boom in business during Eid Al Adha. For a period of 48 hours, a number of the city's shopping centres stayed open continuously - including Dubai Mall, Dubai Festival City Mall, Mirdif City Centre and Mall of the Emirates - with many shops gaining increased business.

Net income at Dubai Mall has risen to AED 581 million (£98 million) from AED 387 million a year prior. This success in one part of Dubai's shopping sector highlights just how much money is being spent and, as previously noted, by foreign visitors. Guests spending such amounts often need other facilities, which has helped lead to the growing hotel and hospitality sector. Many new options - such as the Dubai Marina - are prime investment to benefit the most from these wealthy visitors.

Reports suggest that many who shopped during Eid Al Adha were from the Middle East although Dubai holds many events - including similar retail opportunities such as Gitex Shopper - that draw further global appeal.