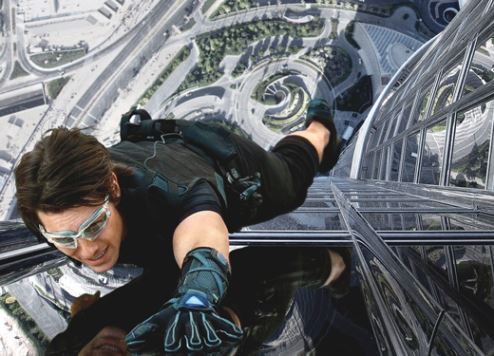 Blessed with a diverse and dynamic landscape, from landmark skyscrapers to rolling sand dunes, Dubai is a city in hot demand among Hollywood filmmakers

Dubai’s status as a filmmaker’s playground has been elevated in recent months with some of Hollywood’s biggest names shooting upcoming blockbusters on the city’s streets.

Traffic was brought to a grinding halt on some of the emirate’s busiest highways earlier this month to make way for martial arts legend Jackie Chan, who was filming his latest action flick, Kung Fu Yoga. The film also used two of Dubai’s most iconic districts, Dubai International Financial Centre (DIFC) and Downtown Dubai - both adjacent to Sheikh Zayed Road.

At the same time, Chris Pine, Zachary Quinto, Simon Pegg and Idris Elba, the leading cast members of sci-fi sequel, Star Trek Beyond, were beamed down to Dubai to start filming the hotly anticipated movie, which is scheduled for release next July.

During a press conference announcing the beginning of the shoot, producer Jeffrey Chernov told Dubai media how major movie shoots played a key role in developing a city’s film industry and raising global awareness of that destination.

“We proved when we shot Mission Impossible with Tom in Dubai that when films come to a city, that helps the city to grow and brings tourism in and new buildings and architecture,” said Chernov.

“The more that happens, the more filmmakers want to come to shoot in the city. We’ve also established intern programmes for every department on the movie, and we want to help the new generation of filmmakers.”

“We wanted a vertical city [for Star Trek Beyond] and talking to [producer] Justin Lin, he had a very strong plan in place about how he wanted to construct this movie,” he said. “We did a lot of searching around the world and I said, ‘I know the very best place to make this movie and it’s in Dubai’ - this city really does represent the future.”

The Dubai Film and TV Commission (DFTC) said the decision to film the sequel of the globally renowned Star Trek franchise in the city was testament to the emirate’s status as a leading international production hub.

“Not only will this shine the spotlight on Dubai and the UAE’s excellent locations, infrastructure and flexibility, but it will significantly boost the UAE’s economy, tourism and entertainment sectors,” said Jamal Al Sharif, DFTC chairman and managing director of Dubai Studio City (DSC).

“Bringing international productions to Dubai helps to facilitate the development of a sustainable local film industry and adds to the city’s already flourishing economy and cultural life.”

He added that Paramount Pictures, the production company behind Star Trek Beyond, joined the growing number of regional and international filmmakers recognising Dubai as the global film industry’s go-to hub in the Middle East.

Issam Kazim, the CEO of Dubai Corporation for Tourism and Commerce Marketing (DCTCM), said film was an “incredibly powerful platform” that could showcase Dubai to “millions of people across the globe”, reinforcing the city’s status as a “world-class tourist destination”.

The total online media coverage advertising value for Dubai as a result of Mission: Impossible - Ghost Protocol being filmed in the city was around US$735,689, according to the DFTC.

The publicity value of TV coverage in the US due to mentions of Dubai was around $7.8 million, the commission’s 2013-2014 report revealed.

Dubai is ranked the third best production city worldwide in terms of its infrastructure, behind London and Hong Kong respectively, and is rated fourth globally in the risk ranking stakes, the report commission’s report stated.

The UAE is predicted to spend more than $300 billion on infrastructure development by 2030, according to hospitality industry consultancy 2030, which will further boost Dubai’s appeal as a hub for international film productions, according to the DFTC.

“The emirate offers international filming crews a variety of new settings to explore, each offering a unique way of presenting a storyline, whether it is the desert, mountains, the sea or in the form of the tallest building, the Burj Khalifa, or the biggest mall in the world, The Dubai Mall, or even traditional souq, markets and heritage districts, encapsulating Middle Eastern culture,” the commission’s report said.

“It also has the ability to represent several other world cities because of the wide variety of attractive locations and has been used in films like The Bourne Legacy (2012), where it stood in for Pakistan, or Mission: Impossible - Ghost Protocol, in which particular shots filmed in Dubai were designed to represent India. Dubai is well on its way to becoming a global production hub in the Middle East, offering a serious competitive edge over its contemporaries.”