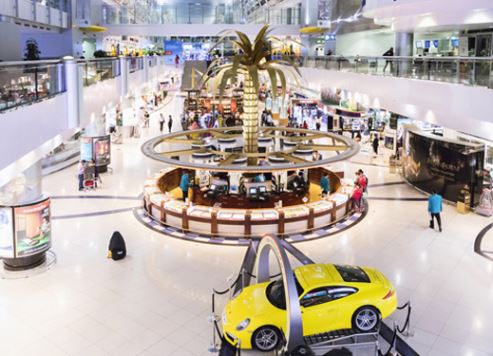 How the emirate’s quest to become a smart city will start with your journey – to, from and through the airport

Dubai’s status as the world’s fastest growing aviation hub is well established, thanks to its advantageous geographical location and robust infrastructure.

Dubai International (DXB) has already superseded London Heathrow as the world’s busiest airport for international passenger traffic with the super hub on track to report throughput of more than 79 million passengers in 2015.

But Paul Griffiths, the CEO of Dubai Airports, which operates DXB and Dubai’s newest airport, Al Maktoum International – Dubai World Central (DWC), has always emphasised that quality is as important as quantity.

“Enhancing the passenger experience” so that both Dubai airports are renowned for their service, as well as their capacity, is a top priority, he notes.

Expansion and facility upgrades are ongoing at DXB, but perhaps one of the most exciting developments planned for the airport is the roll-out of new technology designed to speed up the passenger journey.

In fact, contactless departures could be a reality at DXB as early as next year, according to the General Directorate of Residency and Foreigners Affairs Dubai.

The plan is to do away with many of the immigration counters within the next few months, the department’s deputy director, Major General Obaid Muhair bin Surour, reveals.

“We are coordinating with other partners and the contactless process will be launched in the first quarter of 2016,” he explains.

The airport will use passenger information provided online in advance and Iris on the Move (IOM) technology (biometrics) to help speed up the movement of passengers.

When the system has been rolled out across departures, phase two will implement the technology in DXB’s arrivals areas, adds Surour.

The airport currently has 125 e-gates and smart gates that eliminate the need for UAE residents to pass through immigration counters.

There are plans to introduce both e-gates or smart gates at DWC next year.

Airlines are also looking at ways to speed up the passenger journey, with DXB’s biggest customer Emirates considering introducing immigration on board its flights prior to landing.

Meanwhile, Dubai Taxi Corporation (DTC) and the Roads and Transport Authority (RTA) have joined forces to discuss smart solutions for air passengers travelling to both DWC and DXB.

It means new check-in services could be offered as part of their taxi journey to the airports.

The service, which is being coordinated with Dubai Airports, would see the taxi driver issue their passenger’s boarding pass.

“Under the initiative, the DTC will facilitate the check-in formalities when a taxicab is ordered by a traveller to be lifted from home or place of work,” explains DTC CEO Ahmed Khalfan Al Suwaidi.

“The vehicle dispatched will be fitted with the equipment required to complete the check-in procedure, such as a scale for checking the weight of the luggage, issuing the luggage tag, and printing the boarding pass. The vehicle will then lift the passenger and the luggage to the airport where the traveller will only need to go to the gate for boarding.”

If the initiative is implemented, it will be a world-first for any airport or taxi operator, says Al Suwaidi.

The relevant authorities are currently reviewing what steps need to be taken to implement the service, he adds.

Efforts to roll out a seamless travel experience for air passengers using high-tech systems is just one facet of the RTA’s plan to create “the smartest transportation system in the world”.

A 5-D control room, the largest of its kind in the world, will be the hub created to transform Dubai into a Smart City and will oversee and monitor all aspects of the project.

Speaking at the Dubai Smart City launch, Dubai’s Crown Prince and general supervisor of the project, Sheikh Hamdan bin Mohammed bin Rashid Al Maktoum, said: "His Highness Sheikh Mohammed bin Rashid Al Maktoum does not want to just develop the services, but he wants to change the way of life in Dubai. He did not set for us goals in customer satisfaction, but this time the goal is the happiness of man.

“His Highness Sheikh Mohammed bin Rashid wants a smart city, smart economy, smart education and smart environment; he wants to make a different life, not for upcoming generations, but a different life now."