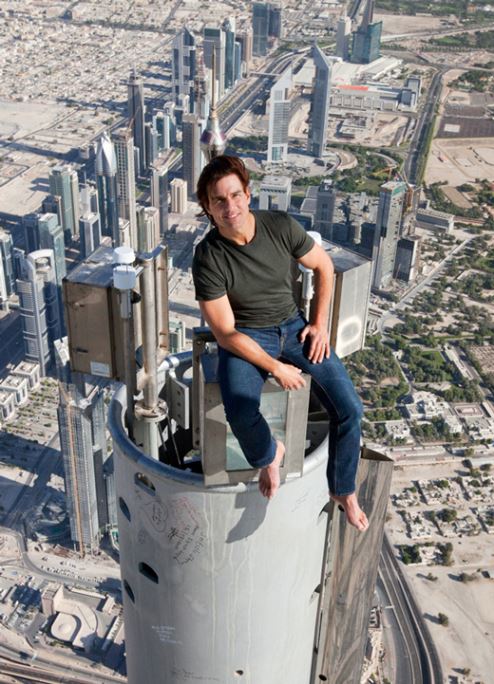 Dubai’s desert views and dramatic skylines are providing the backdrop to action films, adverts and tourism videos that promote the emirate as one of the world’s most exciting destinations

Wing-suited skydivers flying through Jumeirah Lakes Towers, a zip line pitched on to the roof of Dubai Mall and a free-fall line from the tallest residential building in the world overlooking Dubai Marina – these are just some of the stunts that have put Dubai on the global map as an adventure tourism destination.

The latest films shot in Dubai, designed to help launch products and promote adventure sports, have included footage of sandboarding, with riders towed into giant dunes by racing buggies, and a kite surfer making a dramatic launch from the helipad of the seven-star Burj Al Arab, one of the world’s most iconic hotels.

Here’s a selection of the best stunts to have played out on the big screen in recent times.

Kiteboarding champion Nick Jacobsen recently took off from the Burj Al Arab helipad, 210 metres above the water, for footage to be used in a commercial for luxury car brand Mercedes-Benz.

The daredevil teamed up with adventure sports specialist XDubai to perform the stunt.

“Nick had been wanting to do this particular stunt for four years and this collaboration was the perfect opportunity for him to do so,” Mohammed Khoramifar, general manager of XDubai, told local media.

Jacobsen’s kitesurf from the Burj Al Arab helipad was a world-first, and the highest kiteboarding jump from a man-made structure on record, beating his previous best of 90 metres.

“Standing on the top of that hotel was a once-in-a lifetime opportunity and launching from it, a global first," said the five-time Danish national kiteboarding champion.

Fans of Dubai – and running – had the chance to pound the emirate’s roads and desert tracks in the company of world-famous Olympian, Mo Farah, earlier this year.

Mo’s run started in the rippling dunes of the Dubai desert, then swapped sand for tarmac in Downtown Dubai, home to The Dubai Fountain and Burj Khalifa, before passing some of the city’s beaches and finishing with sunset views by the Burj Al Arab.

Throughout the run, set against the backdrop of the city’s most famous landmarks, Mo provided viewers with an insight into his training regime, offering inspirational words and disclosing what motivates him.

“Dubai is a city like nowhere else in the world,” says Farah. “I have visited several times and I am always blown away by the architecture, the culture and the experience. It’s been great to be involved in something that manages to highlight everything Dubai is about, and showcases the city to those who haven’t yet been here.”

The hotel and leisure destination, located on The Palm Jumeirah, had an entire episode dedicated to its marine life, with the luxury resort home to one of the world’s largest aquariums.

TANKED features co-owners of Acrylic Tank Manufacturing, Wayde King and Brett Raymer, who specialise in designing and building over-the-top aquariums. In the Atlantis-dedicated episode, which aired in February, the duo discovered the Ambassador Lagoon, met the sea lions at Sea Lion Point, had a peek inside The Lost Chambers Aquarium, and even dared to experience a thrilling ride on Leap of Faith – the iconic nine-storey waterslide at Aquaventure Waterpark.

Hollywood actor Tom Cruise is well known for perfectly executing his own stunts in true action-hero style and in Mission Impossible – Ghost Protocol, he does not disappoint.

Defying gravity, he dangled from Dubai’s Burj Khalifa, which at 829.8 metres, is the world’s tallest structure, in his role as superspy Ethan Hunt.

For a week in 2010 when the fourth movie in the Mission Impossible series was shot, Cruise ran around the windows below the tower’s Observation Deck, some 124 floors above the ground, to film a hair-raising chase scene, which was surely one of his most ambitious stunts.

At one stage, the fearless actor was seen sitting atop the mega skyscraper, as cool as a cucumber, as he prepared to shoot a scene that put Dubai on the map as a global city, viewed and admired by avid cinema-goers the world over.

Dubai International (DXB), the busiest airport in the world for international passenger traffic and the home of Emirates Airline, is a regular on Nat Geo TV. In the latest 10-part series entitled Ultimate Airport Dubai, the cameras are granted unprecedented access to the mega aviation hub, which in 2016, reported a record throughput of 83.6 million passengers.