Could West Brom striker end up in Dubai? 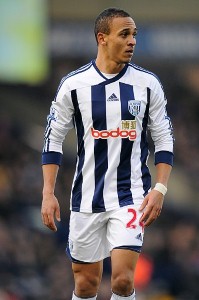 Clubs that ply their trade in the UAE Pro League are desperately trying to raise the profile of the division by luring recognisable players from England.

The latest name to be linked with a move to the Gulf is controversial West Bromwich Albion striker Peter Odemwingie.

Reports have suggested Dubai-based club Al Nasr have had a £850,000 bid for the Nigerian forward turned down by the Premier League outfit.

It appears West Brom are happy to let the 32-year-old leave, but will not lower their asking price - which is believed to be far higher than Al Nasr's current offer.

Odemwingie caused a stir in January when he failed to engineer a move to Queens Park Rangers. The transfer saga descended into farce when he drove to London to speak to Rangers, only to be left sitting in the car park as West Brom refused to accept the bid.

On the face of it, Dubai is the perfect destination for footballers.

The city is renowned for its swanky villas, apartments, fast cars and exclusive nightclubs, while the bumper wages offered by UAE-based clubs are also a big attraction.

Should he make the move, Odemwingie would not be the first African Premier League star to secure a transfer to the Pro League.

Former Sunderland striker Asamoah Gyan joined Al Ain in 2011 and he told reporters this week he does not regret his decision.

'I am comfortable and happy there, and most importantly I deliver when I come to the Black Stars [Ghana national team],' he remarked.

The 27-year-old raised a few eyebrows when he left the Stadium of Light after just two seasons when he was coming into the prime of his career.

However, he added: 'My decision to move to the Arab world bordered on my family and what was good for me and not what people said or will say.'

Gyan has been among the goals since his switch, netting 22 in his first campaign and 31 last season.