Chinese travellers are flocking to Dubai 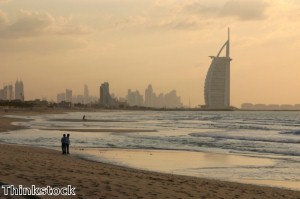 Dubai tourism chiefs are keen to attract more Chinese visitors to the emirate - and so far they are doing a pretty good job.

The Asian country has more than one billion inhabitants, so it makes sense for countries to target this huge market when launching tourism advertising campaigns.

According to Dubai's Department of Tourism and Commerce Marketing (DTCM), the number of Chinese holidaymakers visiting the city in the first half of 2013 reached 143,619 - up by 16 per cent on the corresponding period in 2012, Gulf News reports.

In an email statement to the news provider, the group's chief executive of strategy and tourism sector development Ahmad Belhoul, said: 'China holds a new generation of first-time travellers and we are positioning Dubai as being a destination of consideration for these travellers.'

Hotel owners in Dubai and Abu Dhabi have been reaping the rewards of DTCM's promotional efforts.

There were 23,618 Chinese hotel guests in Abu Dhabi in the first seven months of 2013, which was a 36 per cent upturn on last year. The demand for four and five-star accommodation was particularly strong.

Kulwant Singh, managing director of Lama Tours - a tour operator in Dubai - told the news provider that Chinese holidaymakers tend to travel in large numbers, so it is not uncommon for hoteliers to receive bulk bookings.

'The market is growing. They account for between four and five per cent of our revenue and that's growing between 30 and 35 per cent every year,' he was quoted as saying.

China is one of the top ten sources of visitors to Dubai, alongside India, the US, Saudi Arabia, Iran, the UK, Germany, Kuwait, Oman and Russia, according to statistics compiled by the DTCM.

Encouragingly, all key indicators - including average hotel revenues, length of stay and room occupancy - are all heading in the right direction.