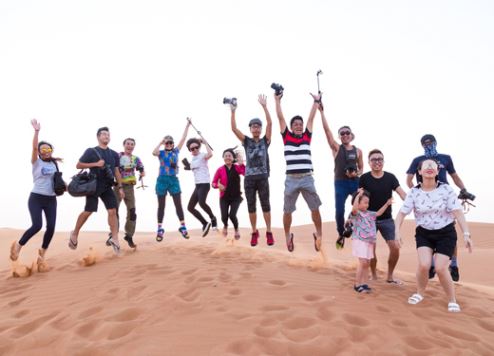 Tourism arrivals to Dubai increased 12 percent year-on-year during the first two months of 2017 to just over three million, nearly four times the growth rate witnessed in the same period in 2016.

A surge in visitors from China and Russia led the spike in volumes, setting the stage for a strong first quarter result, said Dubai Tourism.

The number of Chinese overnight tourists to Dubai jumped 60 percent in January alone, peaking at an impressive 102 percent. During the first two months of the year, 157,000 Chinese citizens visited Dubai.

As a result, both countries moved up the rankings as key source markets for inbound tourism to Dubai, with China entering the top four for the first time and Russia moving up four places, becoming the emirate’s 15th most important source market.

The surge in Chinese and Russian tourists was attributed to several initiatives, with travellers from both countries now granted visas on arrival to the UAE. Destination marketing campaigns targeting China and Russia also helped deliver more travellers from each market.

The importance of ‘ease and convenience’ of access in driving tourism traffic is evident in the immediate results following the policy changes, remarked His Excellency Helal Saeed Almarri, director general of Dubai Tourism.

“As we continue to invest in raising consideration for Dubai as the destination of choice for global travellers, our focus at Dubai Tourism is on increasing Dubai’s accessibility and removing barriers to travel by working closely with partners and stakeholders in the public and private sectors on both a federal and emirate level. Ultimately our collective aim is to make it as easy and seamless as possible for any prospective tourist from our diversified base of source markets to visit and revisit Dubai.

“We are delighted to see visitor numbers make a strong start in 2017. We work closely with the government on initiatives to drive increased visitation, and the decision by the leadership of the UAE to offer visas on arrival to our Chinese and Russian guests has already proven an astute one, as we have seen an almost instant positive effect from both countries.

“Dubai Tourism has invested significant efforts in marketing Dubai as an appealing destination for visitors from China and Russia, and we are encouraged to see such promising results.”