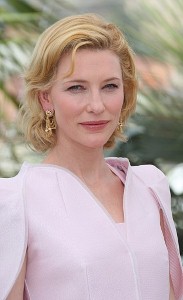 Cate Blanchett is set to head the jury for this year's Dubai International Film Festival (DIFF).

The occasion, now in its tenth year, will choose one of four filmmakers to win the AED 367,000 (£62,000) prize for their film project, which will be announced during a gala dinner on December 7th.

This is the second time Ms Blanchett has been part of the panel, she also appeared last year, showing the growing pull Dubai has within the film industry.

DIFF chairman Abdulhamid Juma said: 'This year we received three times as many entries for the award as in 2012, which speaks for the numerous filmmakers in the region who are ready to take on a feature project and have already done considerable work in terms of putting together a team and financing. The award recognises their vision and gives them a boost with seed money that will attract further investment.'

In similar news, the Meydan IMAX theatre is lending its support to the emirate's bid for Expo 2020. Between November 6th and 14th, it is showing a special movie, entitled Ultimate Airport Dubai, with screenings ten times a day. This is free and open to the public - it was originally meant to stop showing on the ninth, but public support and demand resulted in the cinema extending its run for another week.

Meydan IMAX is the largest screen in the Middle East and Asia, seating an audience of 562 and adding to Dubai's luxury film community.

The four projects in the shortlist to win are A Reverence for Spiders by Faiza Ambah, Siege from Hussain Alfriffaei and written by Ameen Saleh, How I Got There by Zeyad Alhusaini and Waleed Al Shehhi's Dolphins, with a script by Ahmed Saleen. This year's winning director will also be invited back to a future DIFF to showcase the finished movie.

DIFF, which is set to run between December 6th and 14th, announced more films for its impressive lineup earlier this week - this includes Fruitvale Station, which won the Grand Jury Prize and Audience Award at the 2013 Sundance Film Festival.