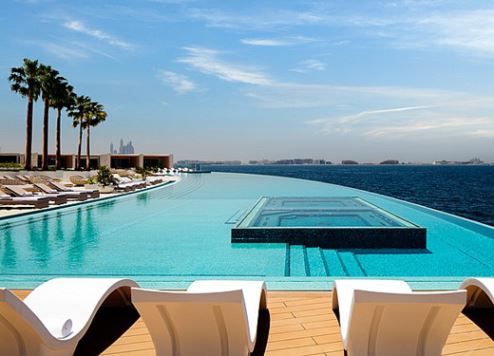 In what has been declared a world-first in marine and off-site construction, the terrace was built at a shipyard in Finland and transported by ship to Dubai in eight pieces to ensure minimal disruption to guests and equally, the seabed and marine life.

The private facility stretches 100 metres out to sea and has been designed to reflect the shape of the Burj Al Arab.

Contemporary structures and tranquil stretches of water are linked by a central walkway, flanked either side by beaches and private cabanas, giving the effect of a “stylised tropical forest canopy”, according to operator, the luxury hospitality firm, Jumeirah Group.

He said the facility was the “most ambitious project since the hotel was created” and a “global first in hotel construction”.

“A masterpiece in design and architecture, it reinforces Dubai as an outstanding destination and leader in global hospitality,” he added.

Features include a 612-square-metre freshwater pool and an 828-square-metre saltwater infinity pool, both with Jacuzzis and a swim-up bar, while the al fresco location of Scape Restaurant & Bar boasts unparalleled views of the Arabian Gulf.

There are also 32 fully air-conditioned cabanas available for hotel guests and members. They can each accommodate up to four people and offer unrivalled poolside facilities - a dedicated butler service; a dining, beverage and bar menu; spa menu; fully stocked mini-bars; fresh fruits; espresso machines; Bang & Olufsen TVs and a rotating amenity cycle with four to six varieties per day. The eight Royal Cabanas also include a private bathroom, shower area and veranda.