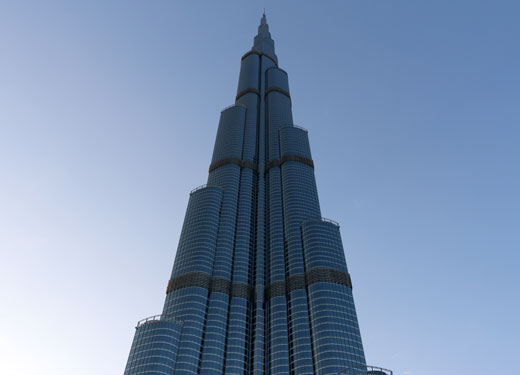 In a city of superlatives, here are the top five landmarks that have helped put Dubai on the map as a global tourism destination

Burj Khalifa is a global icon that reflects Dubai’s vast ambitions. The centrepiece of the Downtown Dubai district, Burj Khalifa is not only the tallest building in the world but the tallest structure ever developed anywhere on the planet. An incredible engineering feat, the building was completed in 2010 at a cost of US$1.5 billion and reaches a height of 828 metres. It was designed by London-based architectural firm Skidmore, Owings & Merill, which was also responsible for the iconic One World Trade Centre, which was built on the site of the former World Trade Centre in Lower Manhattan, New York. The building itself has become a major tourist destination in its own right, and its observation deck located on the 124thfloor, known as At the Top, ranks as the world’s tallest outdoor deck of its type and is a magnet for visitors to the city.

The sheer ambition encapsulated in the design of “the world’s only seven-star hotel”, which opened in 1999, set the scene for Dubai’s radical transformation into a global metropolis over the next two decades.

According to the building’s designer, Tom Wright, his brief was to “create an icon for Dubai, a building that would become synonymous with the place, as Sydney has its Opera House and Paris the Eiffel Tower”.

The Burj Al Arab’s elegant sail-shaped exterior design befitted the building’s incredibly opulent interior, which made it one of the world’s most luxurious hotels. Featuring 202 suites spread across 28 floors, the hotel’s Royal Suite ranks among the world’s top 10 most expensive hotel rooms.

Located on a manmade island 280 metres from the shore and reaching a height of 321 metres, the Burj Al Arab currently ranks as the world’s fifth tallest hotel (ed’s note: The First Group’s upcoming hotel development in Dubai Marina, Ciel Tower, will become the world’s tallest when it opens early next decade).

Stretching 5km into the Arabian Gulf, the Palm took six years to build at a cost of $12 billion. The finished product covers an area of 560 hectares, which is the equivalent of 600 football pitches.

The Palm Jumeirah’s 17 man-made fronds house around 1,500 beachfront villas, while more than 6,000 luxury apartments are located on the island’s main trunk. The outer breakwall protects the Palm’s crescent, which is home to the vast majority of the island’s luxury hotels, including the world-famous Atlantis The Palm.

The Palm is also home to many of Dubai’s best restaurants, bars and leisure attractions, making it a popular destination among tourists and residents alike.

Top attractions include Atlantis’ Aquaventure Waterpark, where guests can swim with dolphins and ride water slides through shark-filled lagoons, while the upcoming $340 million Nakheel Mall and $220 million The Pointe waterfront dining and entertainment destination, which will feature more than 100 restaurants and retail outlets, are set to expand the island’s appeal even further.

Rising to a height of 150 metres and spanning a distance of 105 metres, this iconic window-frame-shaped attraction in Dubai’s Zabeel Park, built at a cost of $43.5 million, includes a 93-metre-long suspended glass-floored viewing platform providing visitors with panoramic views of Emirates Towers and the Burj Khalifa on one side, and of older parts of the city, such as Deira, Umm Harare and Karama, on the other.

The viewing platform itself is complemented by an exhibition gallery and museum on the ground floor, while a panoramic elevator takes visitors from the ground floor up through the rib of the frame to the top floor.

The structure has quickly become one of Dubai’s most popular tourist attractions, attracting more than one million visitors in its first full year of operation.

Claim to fame: ‘The largest frame in the world’

The world’s largest shopping mall by total area, the Dubai Mall has proven massively popular with visitors to Dubai as well as local residents.

It’s compelling mix of more than 1,000 retail outlets, world-class dining options and unique leisure attractions make it a destination in its own right and a fitting counterpoint to the Burj Khalifa, which it is located adjacent to.

Key attractions include an Olympic-size ice rink, an aquatic zoo and aquarium featuring 33,000 marine animals (and the largest acrylic panel ever developed, which separates the marine life from the adjacent public viewing area), a 22-screen multiplex cinema, a souk, SEGA theme park and a children’s activity zone. Outside on the mall’s main promenade lies the Dubai Fountain, which also ranks as the world’s largest fountain of its type, spanning an area of 275 metres.